Will the Bull Market Continue?

Will the Bull Market Continue?

This is now the oldest economic cycle in history at 121 months old – just topping the 1990s technology boom. While there are concerns that the recovery has gone on too long and may end, the ingredients for an end to the recovery don’t look to be at hand. The Fed seems to have the markets back, the current administration is preparing for re-election and will do what it can (think trade policy) to keep the recovery alive. Just as important, but not as objective, is the lack of giddy sentiment that usually fuels the end to bull markets; the sentiment numbers do not yet reflect that optimism.

However, this doesn’t mean there won’t be bear markets! We’ve had 3 during this expansion (Summer of 2011, Early 2016, Fall 2018) and we are certain there are more to come, even if the recovery continues. We just aren’t looking for a bad secular bear market with significantly more than -20% pullbacks.

The Economy, Monetary and Fiscal Policy, and Earnings
It is now clear that what we hoped was a short seasonal weakness in the fundamentals has now morphed into a weaker economy to some degree. Below is a chart of the CFNAI and it is hard to argue that a slowdown is not occurring. That said, we have been here before and the current weakness in the economy has occurred numerous times in this bull market. Unless and until we see a more significant slowdown in the fundamentals, it is hard to see an end to the current bull market. 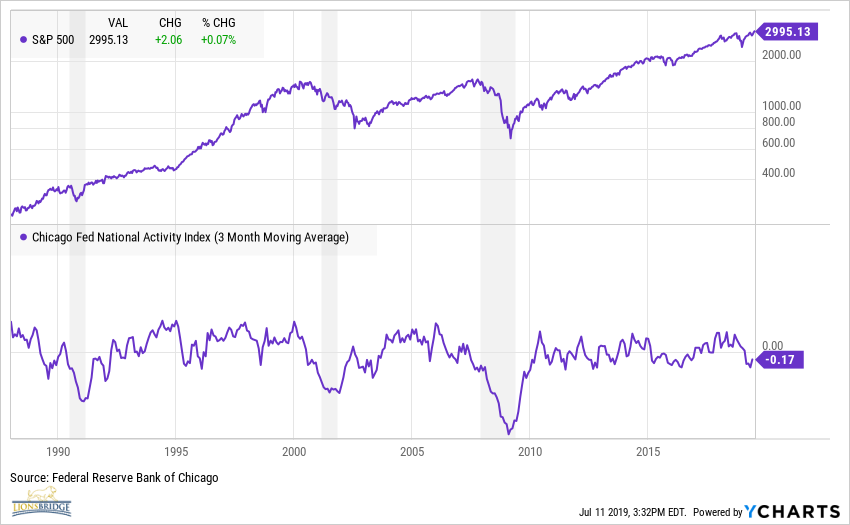 In early January the Federal Reserve invoked the word “patience” to indicate that last year’s rate hikes were over which helped move the stock market off the ledge and has been largely responsible for starting the current rally we are enjoying this year. Since then, the Fed has continued to indicate their concern with the global economy. In this week’s Humphrey-Hawkins testimony, Fed Chairman Powell seemed willing to dismiss the better data we had earlier this month, on stronger than expected employment numbers and continuing low jobless claims from the US, and instead focused on the weaker global data. Powell emphasized that “it appears that uncertainties around trade tensions and concerns about the strength of the global economy continue to weigh on the U.S. economic outlook, while Inflation pressures remain muted.”

Stocks have rallied since early June on the notion of Goldilocks: growth that is slow enough for the Fed to provide cheap money, but not so slow that earnings slip, or the economy falls into recession. Earnings reports for 2Q will be coming in over the next month to test this notion. It is important to note that analyst expectations for earnings are quite low, so the potential for positive surprises is reasonable.

Sentiment and Technicals
In our 1Q outlook we mentioned that the market was overbought. This did result in a modest pullback in May, but that pullback was quickly bought, and we have just set new highs. Our sense is that we are in a similar type of place as we were in April; market breadth is fine, and we see no internal sign of a top, but we are once again overbought. We would not be surprised if a pullback ensues but there are no signs of a more secular top at this time.

Historical tendencies argue for a choppy market until late this year. Year three of the Presidential election cycle tends to show strong returns and the current year is holding true to form. Returns during year 3 tend to come during the first half of the year, with modest gains from now until early December. In a similar study, the last nine times the market was up 15% as of the end of June, the median return for the balance of the year was 3%, and the median pullback that occurred during the second half of the year was about -9%
Our conclusion is that while an important secular top is not at hand, the returns for the year have likely mostly already occurred and we will have choppy markets ahead.

Equity and Fixed Income Strategy
Our equity strategy has kept up with its benchmark as the market has rallied. All three parts of our Equity Strategy (Individual Stocks, ETF, and Alternative) are doing well compared to their respective benchmarks long term. Our stocks do have a quality and value bias which we think should do well in a slow growth environment where valuations are somewhat high. We continue to underweight US Small/Mid Cap as low growth / late cycle fundamentals do not favor this area. We remain underweight international as this area is “cheap for a reason” as fundamentals are much poorer internationally than at home. It should be noted that valuations are now very attractive internationally. We believe the worst of international’s underperformance is behind us and are considering going equal weight sometime this year. Our Alternative strategy continues to outperform other long/short managers longer term, and if volatility picks up and returns are muted later this year, we feel this area of the portfolio is setup for not only continued positive relative returns but also better absolute returns. Fixed Income rates are now very low and credit spreads are also too low relative to the fundamentals. Our total returns have done better than CD rates, but the time for longer duration assets are behind us for a while with rates having moved dramatically lower.