The Bulls and Bears do Battle

The Bulls and Bears do Battle

In our January Outlook we noted that “the fundamentals did not support a move much worse than this…as the market had become very oversold in December…we saw significantly large breadth in buying…this combination…rarely results in the market doing materially worse”. What resulted was in fact quite a rally, the extent of which has surprised most pundits. The S&P 500 was up 13.6% during the quarter and we are close to retesting the highs we achieved in September of last year when the market topped.

In the near term, strong breadth and momentum argue for a continuation of the rally, while various overbought readings of sentiment argue for some sort of a top. Our guess is that the result is resolved in a bit of a tug of war over the summer. Longer term, the fundamentals continue to be “good enough”, a trade deal seems likely and the Fed’s abrupt change from tightening to “patient” are supportive factors. That said, our view is that the market may get choppier for the balance of the year. The yield curve is sending an important cautionary signal, and it’s hard to characterize valuations as anything but expensive. The result is that we will likely have a battle between both bullish and bearish factors, and we see equal chances for lower and higher prices for the balance of the year. Longer term, we still do not see the fundamental precept for a bear market, but warnings signs are starting to appear, and it seems to us that the next 3-5 years will likely bring increased volatility and returns more muted than we have had for the last 10 years.

A cold winter and government shutdown likely slowed the economy during Q1, and this slowing has shown up in the data, but we see few signs that the slowdown will be significant. On the next page you can see that jobless claims continue to trend down. Before the last three recessions, claims turned up and we have yet to see this occur. The PMI and CFNAI data series have both moved lower but they aren’t close to cautionary levels. The PMI needs to get below 55 and the CFNAI below -0.7 to reflect significant slowing.

This slight slowing in the economy and the almost 20% pullback in the equity market last year has spooked the Fed into being “patient” on monetary policy. In January, Fed Chairman Powell said that they were being “patient” which was the fuel for the rally we have had. The market took this as a sign that the Fed’s tightening program in the form of a higher Fed Funds rate and shrinking their balance sheet was on hold. Now that the market has recovered the bulk of those losses, and the economy seems to be on firmer footing, our guess is the Fed will be forced to continue to continue reducing the size of their balance sheet and normalizing interest rates (move higher). But because they have announced a pause only a few months ago, we doubt they will tighten until later this year or next.

Earnings for the first quarter will be coming out over the next few weeks. Analysts have been reducing their expectations for earnings lately and an earnings recession is certainly a possibility. The last time this occurred was 2015 and it wasn’t pretty for the market then. This isn’t our outlook, but we will be watching the data as it comes out. 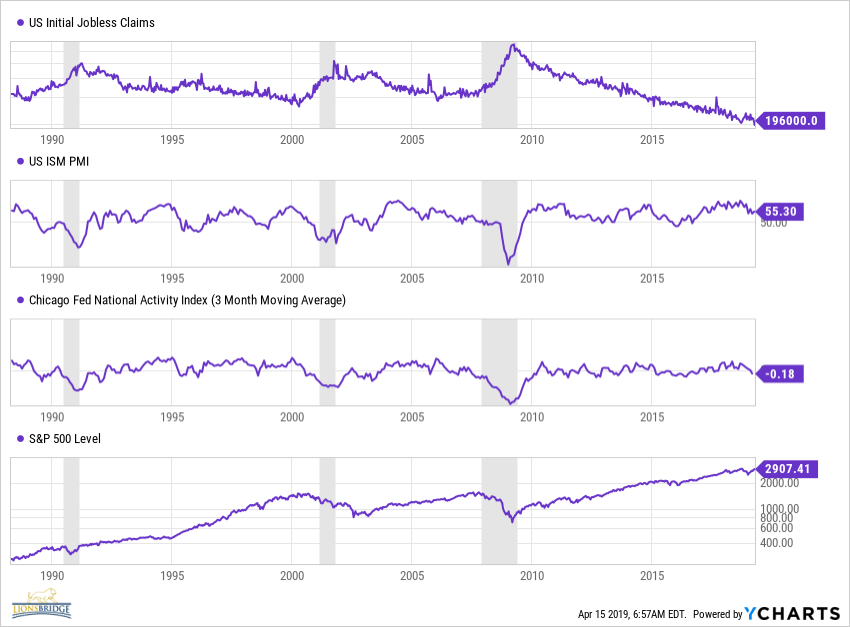 Most signs of investor sentiment are back to overbought levels as the rally has motivated investors that got out when the market dove last year to come back in. This buying has been broad, and most stocks have participated in the rally. There are ways to measure this “strong breadth” and it is historically bullish and argues for the market to continue higher. But at some point, sentiment gets too frothy, and we are close to those levels now, so these opposing conditions argue for more of a choppy market going forward.

Our individual stocks are keeping pace with the S&P500 so far this year, which is impressive as the market has favored growth vs. value over the last few years and our process (while possessing elements of value, growth, and quality) does have a slight value bias. We are looking to add to companies that look favorable on pullbacks in the market, which have been rare since the market basically made a “V” bottom and rallied straight up. Its likely volatility will pick up and we look to add at that time.

Our ETF strategy is doing slightly better than its benchmark (Int’l, Small and Mid-Cap) as these areas (international in particular) have slightly underperformed the S&P 500 and we are mostly in US Large Cap factors that have done better. If we see signs of international growth, we may add there, but the signs are few and far between now. It is also unlikely we will be adding to US small and mid-cap as it is late in the economic cycle for this, but we will see and keep an open mind.

After being the bedrock of safety with actual positive returns in the decline last year, our Long /Short strategy is behind its benchmark, but from the top of the market last year it is still well ahead. This is entirely normal in a “V” bottom type of market and its underperformance is likely behind it.

In Fixed Income, we extended duration somewhat last year, and we continue to look for opportunities to do so, but rates have been stubbornly low. It is quite likely that weaker economic growth abroad is keeping a lid on our interest rates as foreign buying of US fixed income assets is strong. Foreign rates are significantly lower than ours. We are keeping credit quality high in our portfolios as the flat yield curve is a warning sign that we are closer to the end rather than at the beginning of the credit cycle.