Can the Market Hold It’s Gains for the Year?

Home/Market Commentary/Can the Market Hold It’s Gains for the Year?
Previous Next

Can the Market Hold It’s Gains for the Year?

The equity market continues to grind out further gains, advancing a little over 3% during the second quarter, leaving it around 9% as of the end of June. Bond yields also declined slightly during the quarter, but have moved sharply higher over the last week or so, leaving them very close to where they started the year.

Valuations remain extended, reinforcing our belief that returns over the next 3-5 years will unlikely exceed the longer term averages. But that does not rule out further upside in the near term, nor does it make it likely that the market will stumble between now and year end. The path to average to below average returns over the next few years could take many forms. Volatility could pick up due to geopolitical or policy risk from changes in expectations in how the administration will affect fiscal policy. Perhaps the market could surprise the pundits by going even higher as the fundamentals stay on track and pulling further out in the future. Or the market could simply stay in this low volatility type of environment and tread water for awhile.

While economic growth is weaker than in previous recoveries, the fundamentals continue to look “good enough” for a low interest rate environment. The Fed has continued to raise interest rates, but not so much that we are concerned that they may choke off growth. We will continue to monitor changes in all of these areas, but for now the fundamentals are fine. And while there are some signs of concern in valuation and sentiment, we cannot stress enough that favorable Fundamentals are still in place. This is far more important than the concerns we see in valuations and sentiment.

The current U.S. economic expansion is now going on 93 months, which is the third-longest on record. The only two longer economic expansions lasted 120 months – 1991 to 2001, and 106 months – 1961 to 1969. While it is somewhat worrisome that this recovery is now becoming extended,  it isn’t unreasonable to think this expansion could eventually become the longest on record. This expansion has been relatively tepid without the typical boom/boost type of growth that requires the Fed to raise interest rates in a rapid fashion. Low-volatility periods like the one we are in often last longer than expected. They are a result of moderate economic expansion and predictable monetary policy, both of which we see today.

Moreover, the current administration has big plans for tax rates, infrastructure, etc. that would seem to be stimulative to the economy.  Of course, the longer it takes for these plans to come to fruition, the less patient the market will become; but the expectation for this stimulus is still a decent possibility.

Rather than guess, we will keep our eyes on the actual data, and the data is currently positive. We have covered these charts exhaustively in the past, but suffice it to say, the economy, as evidenced by the CFNAI, is still above the level we like to see in terms of the trend of growth. Earnings continue to improve from their “mini-recession” in 2015, and the yield curve is still steep enough to give us reason to believe the expansion is not in danger.

Below we offer a couple of measures of valuation. It’s clear that P/E ratios and the market capitalization as a % of GDP are at levels that are fairly high. But we must stress that there are many different measure of valuation. None are perfect, many are problematic, and often the market can become expensive and just stay there! What we can say is that the market is not cheap, and valuations will make it very difficult for the market to continue to produce the returns it has over the last 6 years of this bull market. But we can’t stress enough that valuation is not a timing indicator. It’s just a simple reminder that being aggressive over the next few years will likely not be as rewarding as it has been over the last few years. 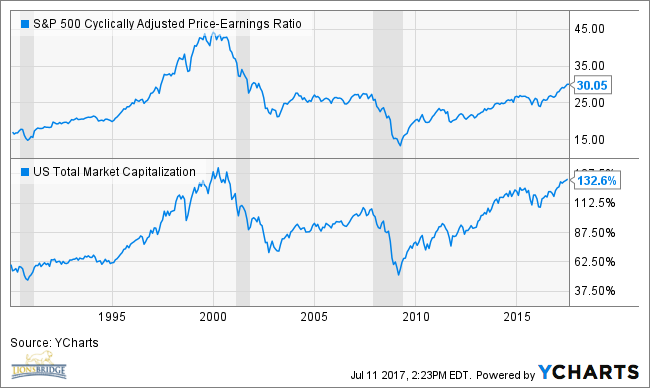 We have often said that one of the components of a secular peak is that “the crowd” or investors as a whole become too enthusiastic that past gains in the market will continue indefinitely into the future. This is the study of behavioral economics – markets often top when the crowd is too optimistic, and bottom when pessimism reigns. The problem is that there is a good deal of subjectivity in how to measure sentiment. There are many measures of sentiment, but most are short term in nature, not long term.

For quite some time, we have opined in our quarterly outlooks that we just aren’t seeing the typical extremes in enthusiasm in the market that are associated with secular peaks. In many ways, this has been the most hated bull market in history. But we are starting to see signs that perhaps the beginning stages of too much optimism are appearing. We don’t want to bore our readers with a bunch of graphs (if you are interested send us an email!) but Hedge Funds are now as exposed to the market as they have been since 2007, 2011, and 2015. Stocks, as a percentage of household financial assets, are at the same levels as 1968, 1996, and 2006.

This does not mean stocks are topping right now. These measures are very long term in nature and, like extended valuation readings, can go on for months, or even years. There are many ways to measure long term sentiment and none are perfect. Our sense is that some excesses are in place, but it’s difficult to say we have the kind of abundant optimism we did in 2000 and 2007. But like valuation, we are seeing some signs of excess and it’s a simple reminder that the best is behind us, and that surprises in fiscal policy, geopolitics, and other unpredictable events may have an undue negative effect on the market.

Through the first half of the year, our individual stock selections have done very well, outpacing the market, continuing a fairly strong performance for our Value, Growth, and Quality process over the last few years. Our Tactical strategy has also outperformed its benchmark but on an absolute basis is lagging the S&P 500 as the market has been well behaved with few pullbacks and the domestic US large cap market continues to be the area of strong performance. The future is sure to offer surprises, and we believe that our Tactical Strategy will pay dividends in a market that either performs poorly or in which areas other than domestic large cap outperform.

Bond rates have stayed in a small range this year, staying fairly low as inflation stays contained. That said, it’s hard to see an environment in which bonds do well as long as the economy continues to improve and monetary policy worldwide becomes less accommodative. In as much, we retain our conservative stance here.

"A Fiduciary Duty is the highest standard of care at either equity or law... A fiduciary is expected to be extremely loyal to the person to whom they owe the duty (the "principal"): they must not put their personal interests before the duty, and must not profit from their position as a fiduciary . . . "