Is the Economy Strong Enough to Support the Market?

Home/Market Commentary/Is the Economy Strong Enough to Support the Market?
Previous Next

Is the Economy Strong Enough to Support the Market?

During the first quarter, the equity market extended its gains from last year, with the Dow and S&P 500 up in the 5-6% range. The bond market has treaded water after yields ratcheted up at the end of last year. Our views for the equity market are still positive as the fundamentals are pointed in the right direction. However, we would not be surprised if more volatility emerges sometime this year. Volatility has been extraordinarily low and there may be some surprises, either geopolitically or from uncertainty over fiscal policy, with the new administration. One market area of concern is that valuations aren’t attractive, but that is to be expected when the fundamentals are good! While a rich valuation does not always portend a significant decline, and history has shown that markets can rally from relatively full valuations, it is not assured, and future returns may be muted. For now, as long as economic fundamentals and corporate earnings continue to demonstrate improvement, we will remain fully invested.

The Economy and Earnings

While many believe the rally in the market since the election is due to the belief that the new administration will be pro-business (cutting taxes, reducing regulation, and spending on infrastructure), we think the answer is much simpler: The economy has been improving. Looking at our favorite measure of economic growth, the CFNAI, you can see in the red circle that the economy has indeed improved over the last few months. This isn’t hope, its actual results. While there is no denying that the new administration could have a positive effect on growth, it’s more important to watch what the economy is actually doing, and by this measure, we are on solid ground. 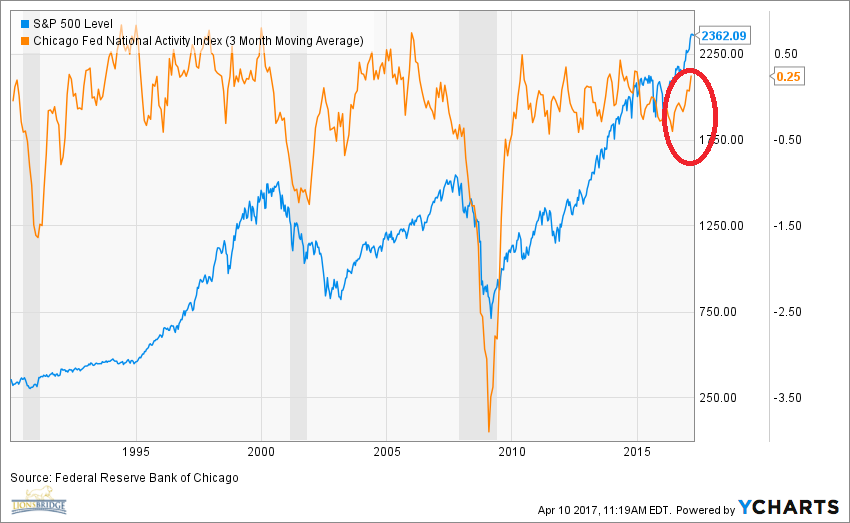 Earnings have followed the same path as the economy. Since the fall of last year, earnings have turned up (green arrow). The choppy decline in earnings during 2015 and early 2016 was a major concern for us. We will be closely monitoring earnings for any signs of weakness but for now we are pleased the trend is up. 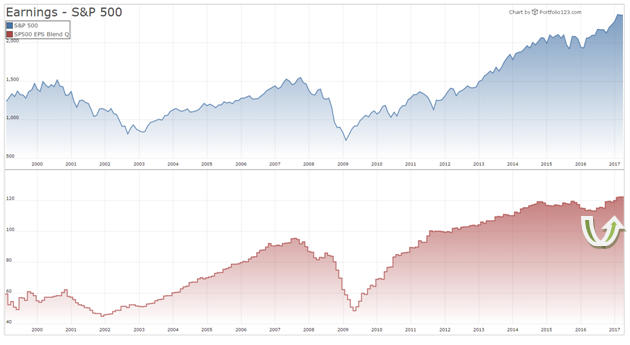 There is little doubt that the market is not cheap, however it is very difficult to measure how overvalued it is and if so, by how much. More importantly, valuation is a terrible timing indicator as the market often continues to do well once it is overvalued. This makes sense because the market should not look cheap if the fundamentals are doing well! It isn’t until the fundamentals turn negative that valuation becomes a concern. Strictly focusing on valuation often gets investors out of a secular bull market far too early. With that as a major disclaimer, below is a chart of two different valuation measures based on P/E ratios. Clearly they are closer to elevated rather than depressed levels, but both measures were at similarly elevated levels years before the market topped. The only take away is that forward looking returns don’t look as good as they have in the past, but they give us little guidance to where the market is going over the next couple of years. 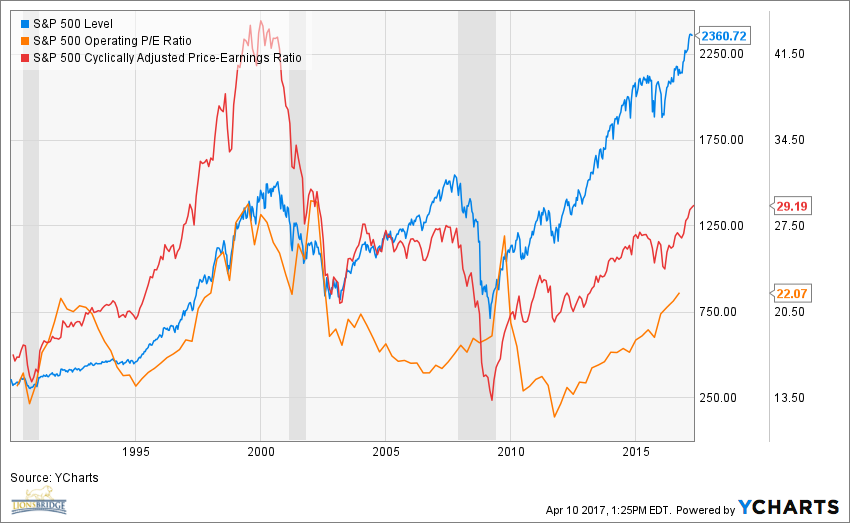 The Fed raised rates once again this quarter after a hike at the end of last year. Like last time, this rate increase was widely telegraphed and anticipated. The Yield Curve spread (difference between 2 and 10 year Treasuries) is still around 1%, which is still relatively accommodative. Until the yield curve gets closer to 0%, our view is that the Fed is still modestly supportive of economic growth.

The first quarter was a good quarter for our Core Stock strategy as we outperformed our policy benchmarks. Our combination Value, Growth and Quality approach has kept us pointed in the right direction over the past 5/6 years.  It’s interesting to note that the stocks that did well after the election (stocks that were expected to do well from more simulative fiscal policy and deregulation) – Financials and Basic Materials –  were not the winners in the first quarter of this year. In fact they generally did the worst. The hated Healthcare sector was the second best performing sector. Another reminder that following a diversified approach in selecting stocks that measure well in our approach, is superior to trying to figure out where the hot money is headed, especially after taxes! We continue to keep a close eye on International stocks. They have performed well so far this year, but our models have yet to confirm a buy signal here. There is little doubt International is inexpensive, but durable economic growth needs to be shown in order to expect a secular uptrend in the International sector. Our models are long term in nature so as to improve after tax returns, so we do not expect to pick the bottom, but we are watching carefully to start adding positions.

Our Fixed Income strategy continues to follow a conservative approach. Rates have done very little this year, which is somewhat surprising given the positive signs for economic growth. We see specialized opportunities in variable rate preferreds and the senior loan areas, but our approach is to not take duration risk in a generally rising rate as a firmer economic backdrop offers muted future returns for fixed income.