Home/Market Commentary/2016 – A Year in Review
Previous Next

2016 was a good year to be invested in stocks – although it did not look that way on Feb. 11, when the S&P 500 was already down 11% for the year. Another reminder that investor sentiment can change quickly! To the surprise of many, the election of Donald Trump was greeted with cheers from investors, resulting in a strong rally to close out the year. The S&P 500 was up 12% for the year, while bonds pared their gains from earlier in the year and ended up 1-2%.

The rally since Election Day has largely been attributed to the potential for corporate tax cuts, looser regulation and fiscal spending under a Trump administration. However, the recent rally has also coincided with an important fundamental improvement: U.S. companies’ return to earnings growth. There is also a cyclical history of outperformance in the first year of a presidency. These factors should offer favorable tailwinds for the market.

These favorable fundamental tailwinds will likely be mitigated by three factors:

First, the global economy is still mired in structural issues that have yet to be resolved: unfavorable demographics and low productivity resulting in slow growth in many countries, a weak European banking system, and excessive debt.

Second, an expansionary fiscal policy does appear to be in the offing under the Trump administration, but deficit hawks in Congress will want to keep any infrastructure spend modest. Practical realities dictate that any spending will also be slowed in its implementation and spread out over time. As such, it is possible that positive expectations for fiscal expansion may only have a short term effect on higher stock prices.

Third, multiple expansion seems unlikely. Valuations are already somewhat elevated, and depending on which measure you use, they may be fairly high. The Fed is also engaged in a modest tightening cycle, which often limits how much investors are willing to pay for a unit of earnings. Ultimately, further gains from stocks will likely NOT come from multiple expansion, so they will have to come from stronger earnings growth.

On balance, our fundamental outlook is positive, but our expectations are somewhat measured due to these mitigating factors.

The Economy and Earnings

After an unsettling bout of weakness early last year, US economic growth improved. Our favorite measure of the economy, the CFNAI, continues to stay above levels we would associate with dangerous economic weakness. Moreover, its upward momentum seems to be improving. Most other economic indicators we follow confirm this notion so at the current time we don’t see anything concerning as far as the economy is confirmed. (chart below) 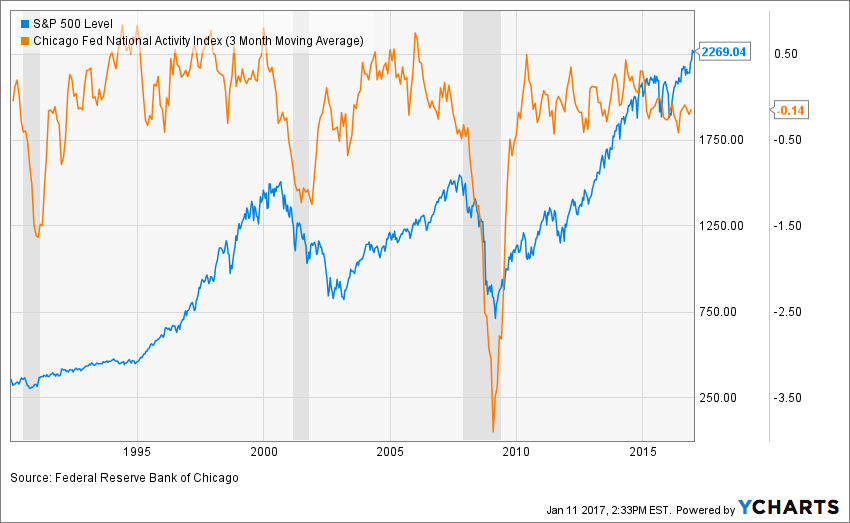 We are pleased to report that earnings are picking up as well. Having flat-lined since early 2015, we have been very closely watching many measures of forward earnings estimates and trailing actual earnings. Early in the 4th quarter of 2016, the earnings picture finally cleared up, and turned higher. You can see this on the graph below – the bottom red line is earnings and it has just recently moved higher, which is a welcome relief. 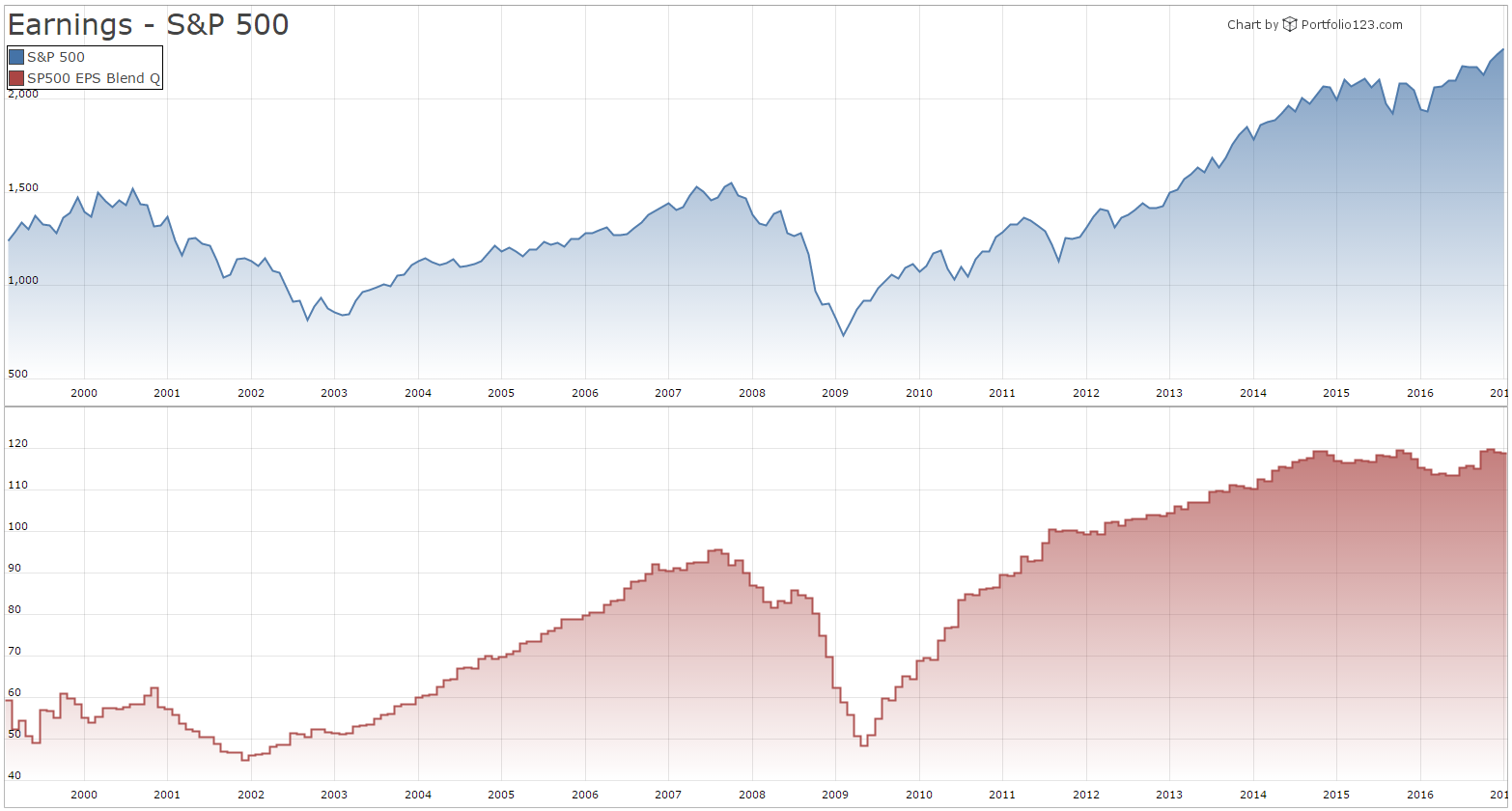 Long-term measures of stock market valuation using trailing earnings (Cyclically Adjusted Price Earnings or CAPE) ratio puts the S&P 500’s P/E at 28, while forward looking P/E’s are at 22. Both measures are well above the longer term averages. Elevated valuations have poor track records of targeting peaks in the market – expensive markets often become more expensive and cheap markets often get cheaper. The only thing elevated valuations tell us is that future long term returns may be less than average – that’s all!

In the Fed’s December meeting, it came as no surprise that the Fed raised interest rates. This move was widely anticipated and telegraphed. The Fed has now raised rates twice and most analysts believe there are more rate increases coming this year. There is little doubt that we are now in a tightening mode, and while concerning, we think there are two reasons to not get terribly worked up about it. We are coming off a very low base and rates are still very low. More importantly, the yield curve (the difference between short and long rates) is still somewhat positive at around 1% (chart below). It typically isn’t until the yield curve flattens or gets inverted where we run into problems, so we still rate the Monetary Policy as a neutral factor. 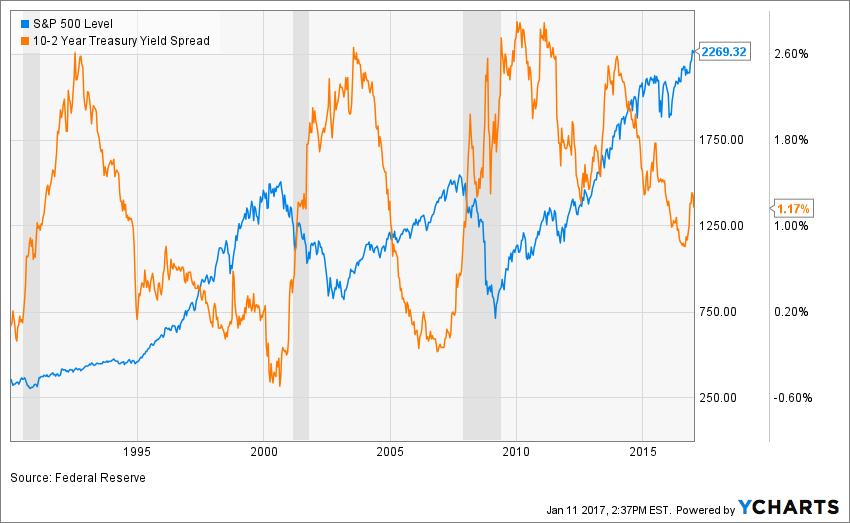 2016 was a good year for our Core Stock strategy as our Value, Growth and Quality approach performed in line with Large Cap indices and provided double digit returns. Our process has a solid longer term record and we are confident that this strategy has a bright future.

While Domestic Large Cap stocks continued their strong performance, it was once again a disappointing year for international stocks and their streak of underperformance over several years is intact. From a valuation perspective, there is little doubt that international stocks offer much more attractive valuations than their domestic U.S. peers. Yet the fundamentals for international still don’t have the same spark that we have here in the U.S. While there were a few signs that the tide was turning for international last year, and we did dip our toes in the water a few times, we quickly retreated from international stocks as the trends weren’t supportive. We will continue to monitor this closely in our Tactical Strategy – if international finally turns it may offer significant potential, but right now we are out of international. U.S. Small and Mid Cap stocks are a different story, and they are out-performing their larger cap brethren. This is largely due to perceptions of a stronger economy and expectations of favorable policies from the new administration. The trends are solidly up for Small and Mid Cap and we are invested in these areas in our Tactical program.

Bond rates had a dramatic move higher in the second half of last year. A stronger economy and perception that the new administration will engage in fiscal policies that will result in stronger economic conditions argue for higher rates. We have kept our bond profile very safe and short in average maturity, and this conservatism has paid off, as long bond investors have done very poorly over the past few months. The bond market is now in a curious position – while the fundamentals argue for higher rates, the move higher has left the bond market very oversold, so a pause in the rally in rates would not surprise us. But it seems as if the trend is now higher. As such, we anticipate keeping our short average maturity intact until we see signs of a slower economy, which don’t seem to be on the near term horizon currently.

We think the improving economic outlook warrants a moderately pro-growth investment stance. The strong post-election equity rally could mean stocks may face a near-term consolidation or correction. However, the fundamentals of improving corporate profits and better nominal growth suggest that stocks look more attractive than bonds or cash. If the global economy shifts into a higher gear, select pockets of non-U.S. equities could have the potential for significant gains. For now, however, we expect U.S. stocks have a little tailwind and we remain invested and observant.