What Does All This Volatility Mean?

What Does All This Volatility Mean?

Since the beginning of 2012, we have maintained a positive view for the equity market. In our view, the economy has been “good enough” to generate modest earnings growth. In a low interest rate environment, with an accommodative Fed, we felt this should result in a good market environment for investors, which it most certainly has been.

In our October 2014 Market Outlook we noted that it had been three years without a 10% correction. Since then, we have had three! The result has been a been big trading range over the last year and a half, with quite a lot of volatility and not much progress….until the last week and a half when the market has rallied 8% to a new high. The markets reasoning seem to be that Brexit will keep the Fed at bay.

The economy has shown signs of improvement since earlier this year, a welcome sign. Even if the Fed does start tightening later this year, it will certainly be because the economy continues to improve. As long as the Fed doesn’t tighten too much, (more about this later) the markets will likely view this positively.

That said, fundamentals and earnings aren’t overwhelmingly positive. With valuations somewhat extended, and more uncertainly from Brexit, a contentious election later this year, and continued concerns about weakness in Europe, Japan, and China, we doubt the volatility is behind us. It’s imperative that the economy and, in particular, earnings (more about this later) improve this year.

Our favorite measure of the economy, the CFNAI, is still in “good enough” territory. After some weakness earlier this year, this measure has shown improvement recently, rising up to -0.12 (chart on next page). This indicator measures if the economy is above or below its trend, with 0% being considered growing “at trend”. As long as this measure stays above -1%, indicating the economy isn’t growing too far below trend, this has historically been a favorable environment for the market. 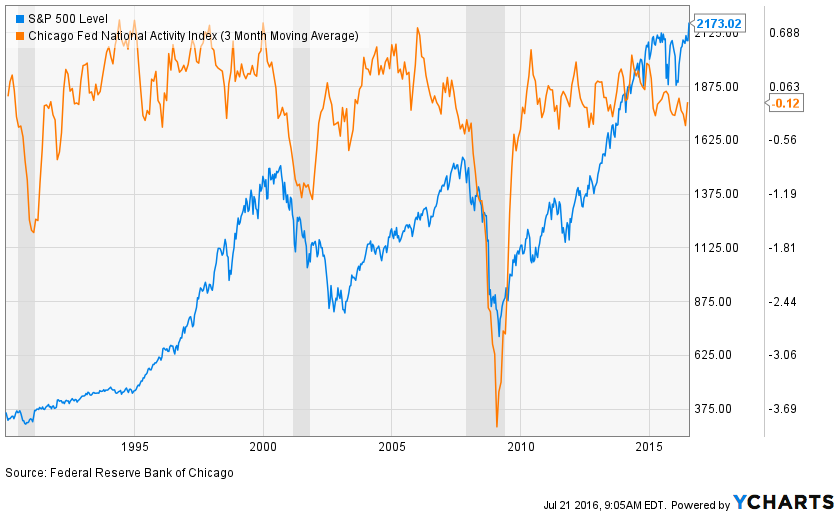 The message from the Fed continues to be the same: while they did tighten once late last year, they are still exhibiting accommodative monetary policy. We can measure this by looking at the spread between the 10 Year and 2 Year Treasury – the Yield Curve. Historically, as long as the Yield Curve has been positive, the Fed is on our side, and this continues to be the case as you can see in the chart on the next page. Close examination of the chart shows that the Yield Curve has been narrowing. This is not a concern until it gets negative. A narrowing Yield Curve is usually a sign that the Fed is in the early to mid stages of raising rates as the economy improves – typically a good environment. It’s only a problem when we get to the late stages of a cycle, when the curve goes negative, where we have to raise our level of concern. 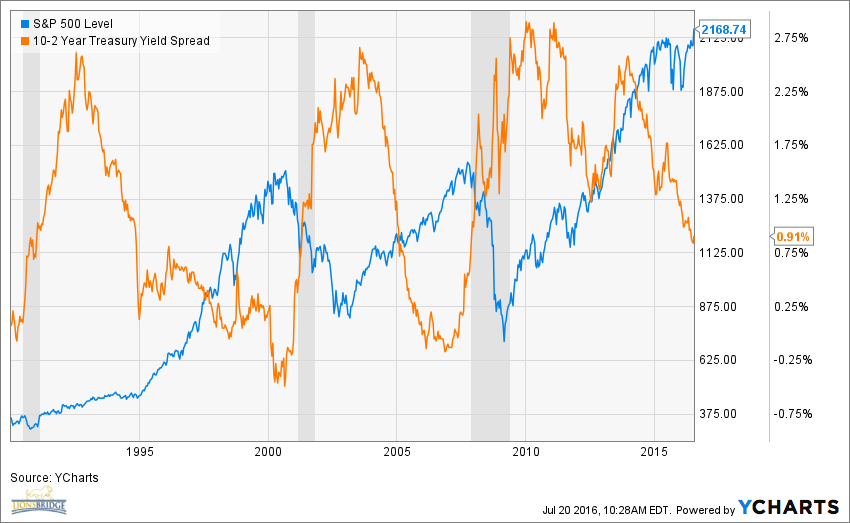 As we alluded to in our Overview, earnings have slowed over the last year or so. There are many measures of earnings (Trailing, Current, Forward, Quarterly, Annual), but our favorite measure is a mixture of the last two quarters, together with analysts estimates over the next two quarters – a good balance of  all available measures. What we find is that earnings have gone sideways over the last couple of years. Declining earnings are the most obvious sign of a bear market, and this is not the case currently. But, we do need to see improvement soon. This is our biggest concern at the moment. While it is not an immediate negative, this is one area that gives us caution, and we are monitoring this in real time to look for signs of deterioration. 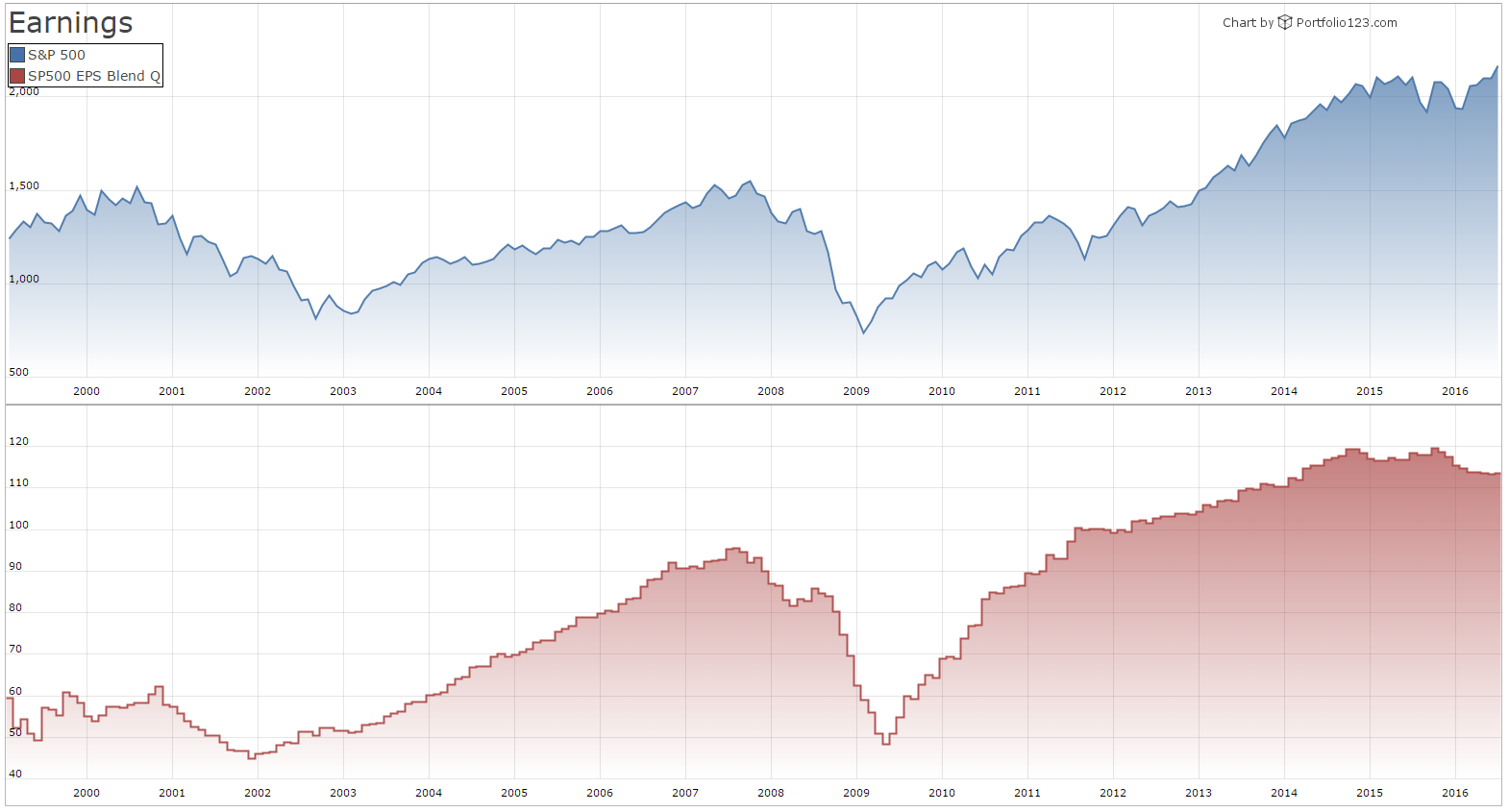 High Yield Bonds, Market Breadth and their relationship to the Equity Market

Historically, we have found that two other measures – the High Yield bond market and market Breadth, have also been reasonably reliable measures of the long term trend of the market. Often, High Yield bonds are a leading or at worst coincident indicator for the market. When High Yield bond yields start to trend higher, market participants are becoming concerned over credit conditions. High Yield bond yields started moving higher in late 2014, right as we were entering the volatile range we have been in for the last couple of years. But earlier this year, High Yield bonds have shown marked signs of improvement with yields declining forcefully. This would seem to confirm the strength in the equity market we have seen since the low in February this year.

Breadth can be measured many ways, but in general it measures how many companies are participating in overall market gains or declines. Healthy uptrends are usually accompanied with high participation in most stocks, and very strong measures of breadth often foreshadow further increases. Such is the case at the moment. The latest rally since Brexit has been very powerful with most stocks participating in the rally, this measure seems to be confirming the rally at the moment.

Our Long Term Equity Strategy has continued to show strong performance this year as our  Value /Growth/Quality model has pointed us to stocks with good long term potential in a tax sensitive manner. We have made several changes this year, and in the coming months, we expect to trim a few stocks that have deteriorated in our model later this year from overvaluation.

Our Tactical Strategy has lagged a slight amount YTD, but when the market declined to start the year it did a great job of hedging the market decline that did occur. The choppy environment has been quite a challenge for managers who attempt to mitigate risk, and our approach here is doing better than most Hedge Funds and Mutual Funds that follow a similar approach, so we are pleased with the results. Similarly, we have been able to sidestep the weakness in International again this year. Valuations are very cheap in this area at the moment, so we are closely watching for signs of economic improvement and trend change.

In Fixed Income, the resiliency of the fixed income markets continues. Yields are lower for the year, and we have not only earned a coupon but some price gains to boot. Given the recent reports of strength in our economy, we are surprised that yields aren’t higher. It is clear that the negative interest rates that are so prevalent in Japan and much of Europe are due to uber-accommodative monetary policies in other countries, and this is affecting our bond market, in a second handed way. If you are an investor overseas, would you rather have a negative yield or a modest yield in US dollar denominated bonds, albeit with currency risk? The bond market is difficult to gauge now, in our view. While deflationary forces world-wide seem to be keeping interest rates low for longer than most anticipated, we still feel a conservative policy here is the best approach, so we are keeping our average maturity conservative at the moment.

In summary, we are guardedly optimistic for the balance of the year. Most factors we follow are positive, but we still believe the road will be bumpy as the election, weak international fundamentals, and modest earnings growth economies may exact continued volatility on our markets. In the near term, while the break out to new highs is a welcome change in market character, it does leave us in a slightly overbought state, so some backing and filling would not be surprising.