Is the Market Stuck in a Range?

Home/Market Commentary/Is the Market Stuck in a Range?
Previous Next

Is the Market Stuck in a Range?

In our Q1 Market Outlook we outlined a detailed thesis for periods of potential weakness in the markets which ultimately should remain locked in a trading range for some period of time. The first quarter certainly delivered that exact environment.

Almost immediately at the start of the year the market plunged on the heels of China devaluing the Yuan and exceptionally weak oil prices, further fanning fears of solvency issues with banks and a weakening economy. By Feb 11th the market was down more than -11% for the year, one of the worst starts to a year ever. Panic started to set in as evidenced by the headlines at the time: CNBC: “Don’t even try picking a bottom here”, MarketWatch: “The Dow’s downtrend is now official”, Financial Times: “Global stocks on verge of bear market”, TheStreet: “Just admit it, this is a bear market”.

Since the low that day the market has staged a fierce rally with the market in positive territory for the year and erasing the losses from January and February. This turn has also been one of the best comebacks to a poor start for a quarter ever. The impetus for the rally was rooted in firming oil prices, a somewhat firmer tone in economic numbers and a Federal Reserve affirming a strongly dovish tone, thus assuring the market that it does not intend to raise rates until clear signs of economic expansion.

Investors acted as you might expect. During January investors pulled nearly $5 billion out of global equity mutual funds. Since then, they’ve plowed nearly $7.5 billion back. This was an environment susceptible for getting “whipsawed”, selling close to the bottom and buying back in late after the market staged its rally. Our models did an excellent job navigating through both the correction and the rebound.

We continue to favor the view that the market is locked in a range as deliberations over Fed policy, global economic fundamentals and valuations are debated by investors. The result should be an environment of somewhat higher volatility with little absolute progress. The ultimate arbiter of the direction of the market will be linked to how resilient global economies are with regard to improving earnings.

We will likely be battling a number of positive and negative fundamental and technical factors for the next few months; our suspicion is that the market is favored to stay in the range it has been in for the past year and a half (exhibit 1 on next page). This chart goes back to the beginning of 2013, and the yellow highlighted area is the fall of 2014. Since then we have been trading in a 15% range and we would not be surprised if we stay in that range for some additional time. 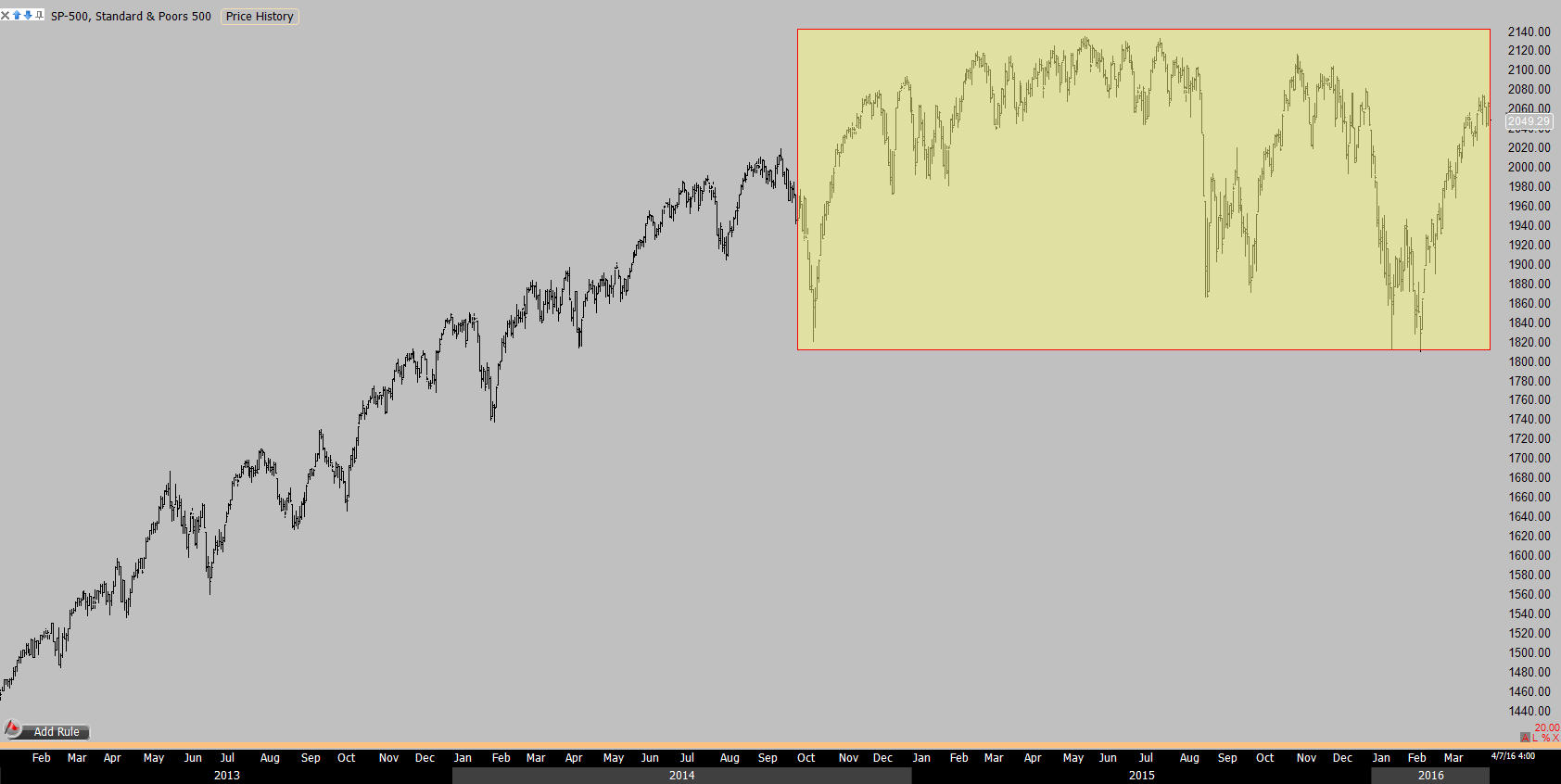 In general, we received positive news during the quarter. Our favorite economic indicator, the CFNAI continues to signal an economy that is growing right at its historical trend. For all of the concern about employment, the reality is that the employment picture continues to be fine. Other measures of economic growth have firmed – in particular Retail Sales and Industrial Production have both improved from the admittedly weak showing at the end of last year with help from the industrial sector.

On its own the U.S. economy is fine. However, the international picture is less clear and certainly less positive. Europe, Japan and China are all experiencing slowdowns and their monetary policy authorities are trying to battle the weakness by lowering rates; in some cases below zero! This is the conundrum the Fed is now facing. The U.S. economy is likely strong enough to continue normalizing rates from the Zero Interest Rate Policy (ZIRP) the Fed maintained from 2008 – 20015, but the fear is that weakness in foreign economies will spill over into the U.S. and threaten our recovery. This is the battle we referenced in the overview, the battle of opposing economies and interest rate policies among the weak international economies and the stronger U.S. domestic economy. This is the battle ground of perceptions where investors are looking to glean clues to gauge market direction, but it seems many are still undecided.

When looking at the various valuation measures we monitor, the balance of the evidence is squarely on a fairly valued market. There are some measures that suggest concerning levels of over-valuation (trailing long term P/E ratios), yet others show significant levels of under-valuation (earnings yield relative to interest rates).

A more concrete clarification lies in the returns and duration of the market itself:  At the end of the 2015 the S&P 500 has been up +12.6% over the last 5 years (annualized). Since 1950 the average rolling 5 year return has been 11.0 %. In terms of time, this bull market (it started in the fall of 2011) is now 6.2 years old, and the average bull market is 5.4 years. Both of these measures suggest that we are closer to the end of the bull market than the beginning, and forward returns over the next 5 years are unlikely to be better than the long term average.

The long term trend cracked earlier this year when we were trading at the lows of the market. We were significantly below the 200 day moving average, a common measure between bull and bear markets. This was reversed in the rally over the past month and a half and we have moved back above the 200 day MA, and the breadth in the rally has been exceptionally strong. This reversal highlights one of the strengths of our technical models in our Tactical Strategy. We use several models measuring several time frames to avoid the whipsaw effect than can occur by just simply following one particular model. We were able to take a defensive position on the way down, and were also able to get re-engaged in the market at levels that didn’t leave too much performance on the table.

What may be a bit of a surprise is that while the S&P500 was down -13.9% from the highs of the summer of last year (blue line below), the recent market decline has been much worse in other areas of the market that investors typically allocate funds. Small Caps (green line) were down -20.5%, Developed International was down -23.9% (yellow line), and Emerging International was down -31.2% (red line): 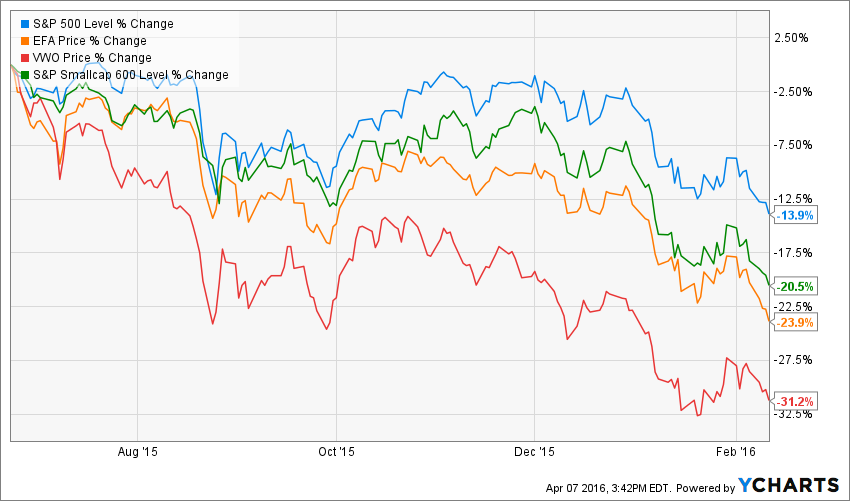 Our Tactical Models have done a very good job of steering us away from these underperforming market sectors and we avoided what was a much more painful ride for many investors. If the trends for these markets start to show some durability for outperformance we will certainly look to start allocating to these areas, and there have been some recent signs of that developing.

As we outlined above, our Tactical Strategy did a great job of getting defensive and conservative when we needed it earlier this year, and also moved us back into the market on the bounce. Our Long Term Equity Strategy continues to identify attractive stocks that have provided good relative returns in both the recent decline and also over the rallies over the past few years. Our bond strategy is conservatively positioned in terms of duration risk with a short average maturity, which is consistent with the stronger economic numbers we have been seeing as of late. The diversification of models and strategies is working well for us so far this year. Looking forward, the one thing we are certain of is that there is more uncertainty ahead of us.