What Does the Rebound from February Mean?

Home/Market Commentary/What Does the Rebound from February Mean?
Previous Next

What Does the Rebound from February Mean?

During the second quarter, the market staged a choppy rally from the lows it set on April 2. However, underneath the hood, there were large differences in performance. US Small Cap and more aggressive sectors had larger gains, while more conservative sectors like industrials, financials, and consumer staples were negative. International was also in negative territory.

Concerns over a possible emerging trade war and higher interest rates were offset by optimism over the economy and earnings. We will likely continue this theme for the foreseeable future. As we have mentioned many times over the last few years, the final stage of the market rally will be characterized by concern that the Fed is raising rates, but ultimately the market will conclude that an improving economy is more important than rising rates. This stage can last from a few months to a few years, and it almost always ends many months before the fundamentals sour, and often very quickly. As long as the fundamentals and market trends are positive, which is certainly the case now, the market has the ability to continue move higher in this choppy manner.

Our view is that the market likely has a reasonable opportunity to make new highs later this year, or possibly next year. Once this occurs, we would not be surprised of a difficult market environment as excessive valuations and a restrictive Federal Reserve become more important than an improving economy.

Economic numbers are looking very good, in our view. The economy is rapidly improving from the days of the Great Recession and has finally seemed to normalize. If anything, the fear now is that the economy is running too hot and the Fed’s accommodative monetary policy has made it more difficult to cool off inflation, if it picks up. Inflation has been in check so far, but we are watching for signs at the margin.

Fed officials have now spent several meetings discussing the prospect of monetary policy moving away from stimulating growth to possibly restricting it. Fed Funds are at 1.75% – 2% now, and their June projections show most of them expect the rate to move to between 2.75% and 3%—an approximation of neutral. This is where long term rates are now, which would result in an inverted yield curve. Following five of the past six periods in which the yield curve inverted, the economy tipped into recession within a year, according to data from the St. Louis Fed.

The equity market almost always peaks 6-12 months before the economy does so the timing will be very tricky. This is compounded by trying to gauge what the effect will be from what appears to be the biggest trade battle since the Great Depression, in an environment where valuations are quite extended. As we have been saying for over two years now, valuations are high because the fundamentals are favorable. But the room for error is very narrow. For these reasons, we are very focused on any changes at the margin for the fundamental direction of the economy and earnings. For now, the trend is still positive.

Last quarter, we submitted evidence that this is no longer a hated bull market. Investors are finally embracing the bull market, but it’s amazing that it took nine years of rallying for that to occur! Secular tops almost always occur when too many investors are over extended and too aggressively invested. There is no one study that has reliably pointed this out – it is a balance of evidence. And in this regard, we are seeing some signs of an over extended market. As we mentioned earlier, performance has been narrowing to only the most aggressive sectors, which is often a warning sign. More evidence of a narrowing market is the $ value of turnover. As uncertainty increases, so does turnover, and this turnover often precedes secular highs in the market. This last occurred in the first quarter of 2000, and the first quarter of 2006. In the first instance the market didn’t top for another nine months, and in the second instance it didn’t top for another 21 months. So, this isn’t an immediate sell signal, especially when the longer-term trends and fundamentals are positive, which they are. It’s a reminder that the market is getting frothy and that being more aggressive is less likely to be as rewarding in the future than it has been in the past 9 years. 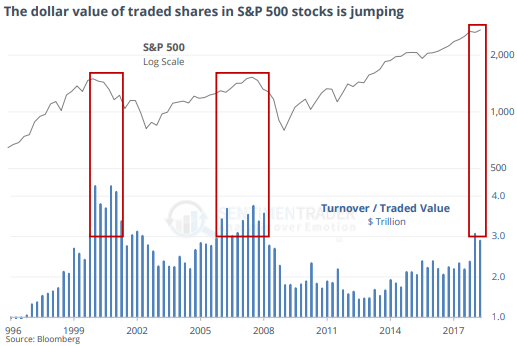 This is a tricky environment for stocks. While most measures are positive, some warning signs are showing up. At the end of a bull market, market performance narrows and the risky higher beta areas outperform, while the safer, more conservative areas underperform. Such has been the case this year. Our individual stock strategy is a balance between Value, Growth, and Quality, but make no mistake, the Quality and Value component keeps us away from the Go-Go stocks selling at wild valuations.

And while for the last several years our performance has easily been top quartile for US Large Cap managers, and far superior to Value managers, our Individual Stocks are underperforming slightly this year. No manager can beat the market every year as styles move in and out of favor. So, our approach is to move out of stocks that we do not favor and use ETF’s to get exposure to more favorable areas. This strategy has worked well as we have underweighted International and over weighted Growth, US Small/Mid Cap and Momentum producing favorable returns for our ETF Strategy. The market’s plunge in February produced stellar results for our Long/Short Strategy, but since then the market has been locked in a trading range, which is a difficult environment for this strategy. Once the market shows its hand to the upside or if we have a surprise to the downside, we expect better results here.

In fixed income, our exposure is still very conservative. The bulk of the damage from higher interest rates occurred in the first quarter – during the second quarter there was very little change. While US fundamentals are positive and strongly argue for higher rates, foreign economies are much weaker and foreign investors see our rates as attractive. We still think rates will likely move higher, so we are keeping maturities short. The opportunity for better fixed income returns will be in place when two things occur: 1) rates stop moving higher, likely at levels higher than we are now, and 2) we extend our maturity structure to take advantage. Neither has occurred yet, so we are playing defense which has worked very well as we are outperforming our benchmarks this year.