Where Did the Quiet Market Go?

Where Did the Quiet Market Go?

The first quarter ushered in volatility which we haven’t seen in several years. After a strong 7% rally in early January the market declined almost 12% in only 10 days! Since then the market has been locked in a wildly volatile range. The net result was a mild decline in the S&P 500 of 0.8% for the quarter.

To reprise what we stated in our Market Outlook at the beginning of the year:

“Given the lack of volatility, it wouldn’t be a surprise that the market finds something to be worried about and a near term pullback ensues. We have often noted that, on average, 5% declines happen three times a year and 10% declines occur once a year. So, when that happens, it doesn’t mean the bull is coming to an end.”

The concerns weighing on the markets during the quarter was a fear of higher interest rates combined with escalating worries of a global trade war. We will reiterate our view: until we see fundamental signs in the economy that a bear market looms, we are likely just digesting the impressive gains over the past few years. Bear markets are usually a by-product of a poor economy and we still don’t see the data to support that.

Of course, that doesn’t mean we will wait for a poor economy to cut risk. The long/short component of our equity process has reduced the beta (sensitivity to market volatility) in our portfolios, as the trend in the market has turned negative in the short term. If the trends turn positive, we will increase the beta in the portfolios.

There is little doubt that the market has a couple of strikes against it: The Fed and valuations. The Fed has made it clear that rates will continue higher as the economy shows continued signs of strength. While this is certainly a negative, increases in interest rate policy have a long and variable lag until they effect the economy. Similarly, there is little question that the market is richly valued, but the market often becomes richly valued long before it tops because these higher valuations reflect a strong positive: the economy and earnings are good!

For these reasons, we are very focused on the fundamental direction for the economy and earnings. Reported earnings during Q1 was the best we have seen in many years and the measures we favor to determine economic growth are far from bear market territory.

Over the last few years, we have often observed that this is the most hated bull market of all time. Below, we submit a chart that illustrates this point. Usually in a bull market, investors see the positive signs early in the recovery and longer-term sentiment measures such as the one illustrated get overbought (red circles). Like interest rates and valuation, these overbought signals often lead by years before the market tops, and in this instance, reflect the market’s confidence in the improving trends. Surprisingly, this recently only first occurred early in 2017. If the past is a prologue, we still have more time before the bull market ends. 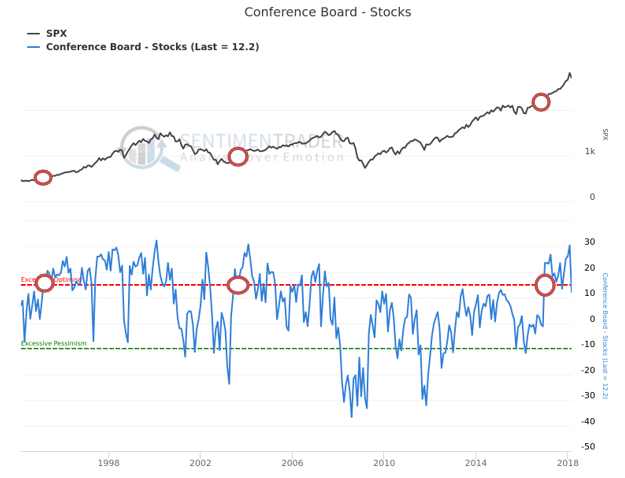 While we are still positive longer term on stocks, we have taken steps to reduce risk on a couple of fronts: First, we have pared our individual stocks back slightly and moved the proceeds into ETF’s and the Long/Short model. This will allow us to gain exposure to other areas of the equity market rather than US Stocks, should we need to. Second, our Long/Short model is defensive, and will have a beta less than that of the market if current market trends are negative.

In fixed income, we continue to see a greater chance for a normalization of fixed income rates as the Fed raises interest rates and reduces the size of their balance sheet. Our fixed income portfolio is conservative both in terms of interest rate and credit risk. As rates move higher, we hope to see better levels to extend the duration of our portfolio and lock in better yields than we have at the present. Until then, a defensive approach seems the best course.