The Battle is On

The Battle is On

A battle between The Fed, Sentiment and Valuation
One of the most important drivers, if not the pre-eminent force, propelling asset prices since the Great Financial Crisis has been Central Bank Policy, both here and abroad. The below chart outlines this notion quite dramatically. If current fiscal and monetary policies continue the path they have followed since March of last year, it’s hard to see a bear market evolving.

However, we are seeing growing evidence of not only a highly overvalued market, but for the first time since 2000 and 2007, evidence of optimism for markets that usually only occurs at secular highs. We have included two charts illustrating this in appendix A at the end of the Outlook. For the sake of brevity, we only picked two, but it is clear to us that the market is reaching a level of valuation that can only be described as historically expensive. Moreover, the market can also only be described as exhibiting the kind of euphoria that often occurs close to secular peaks in the market. Neither guarantees a high in the market in the near term, but both suggest that returns in the medium to long term could be challenging.

Our concern is that hyper-expansionary fiscal and monetary policies are being strengthened and implemented, with no signs of abatement, while we are at the extremes of historic measures of valuation and sentiment. We are unsure how this plays out in the near term. It is very possible that the central planners win out and extend the cycle for several months…if not years. However, over the medium to long term (2-5 years) we believe the chance for a damaging bear market is likely. 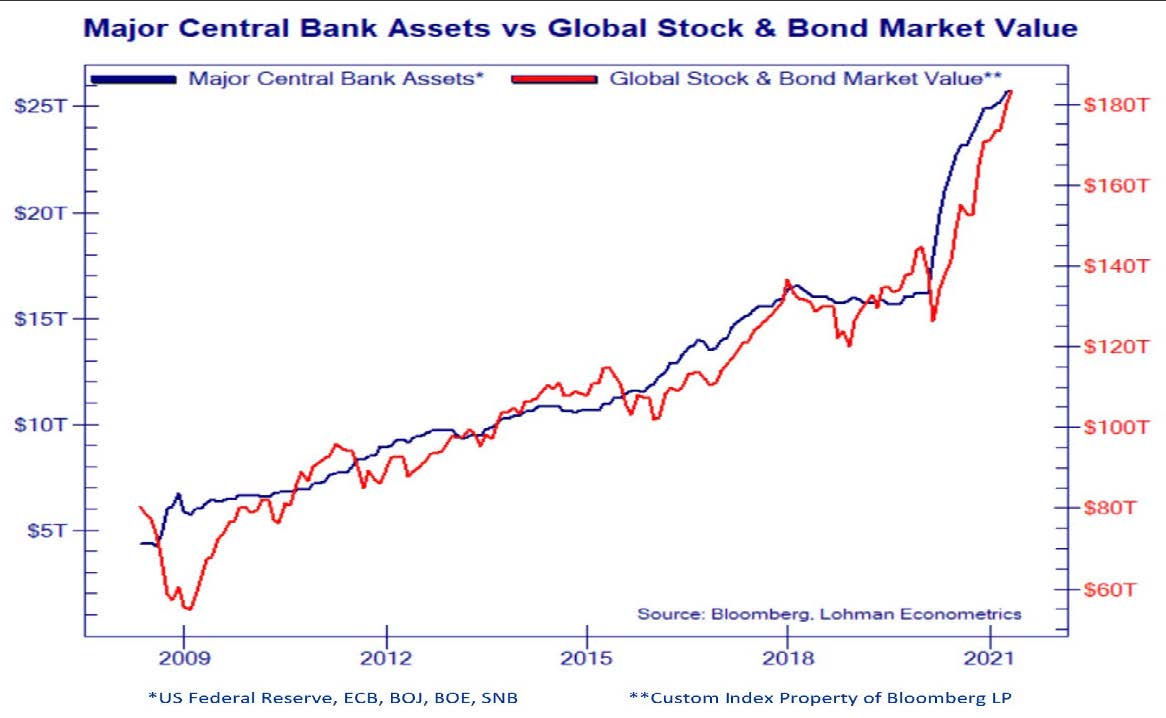 The Fed
In his March press conference, Chairman Powell emphasized that current monetary stimulus programs would remain until the labor market has achieved maximum employment and inflation is above their 2% target, for some period. The Fed will let inflation run hot, to 3% or 4% as they believe that structural dis-inflationary headwinds will keep average inflation low over time. Currently, they believe this means they will keep Fed Funds near 0% for another 2 years until 2023, and asset purchases to the tune of $120 Billion per month to keep longer term rates in check.

It is hard to overstate how revolutionary this is. The Fed has been worried about inflation for decades. Tightening campaigns started in 1999, 2004, and 2015 were meant to preemptively “take away the punch bowl” to battle inflation. But the truth is that inflation has been declining for 4 decades now due to the massive structural deflationary effects of technology, an aging population, and the increasing amount of debt loads. 40 years after the fact, they have now recognized these deflationary forces and believe that they will continue to keep inflation in check, and it is safe to allow inflation to run hot as it is unlikely to get out of control. While we agree that these deflationary forces are powerful, one must wonder if their newfound lack of fear of inflation is a little late! We hope they are right, and the unprecedented amounts of fiscal and monetary policy do not stoke inflation as the cost to being wrong may be catastrophic to asset markets in the long term

Equity Strategy
The market has moved higher so far this year with the S&P 500 up +13% YTD. Early in the year, higher yields were powering small caps, cyclicals, and value stocks to outperform the market, while “long duration” growth and tech stocks whose earnings streams are more heavily discounted by rising rates were reversing last year’s outperformance. This bias toward value and against growth has abated a bit in the last few weeks as the market has adopted the Fed’s view that inflation will be transitory, and technology and growth may be reasserting their former outperformance. For the first time in several years, we are close to our Policy Benchmark in US Small/Mid Cap and International (15% in each respectively). Our view is that valuations between US Large Cap – driven by Technology – and everything else is at extremes and over the next 3-5 years we may see reversions to the mean in these areas. It may not occur in the short term if rates start to fall again, so this is a longer-term theme.

Hedge and Alternative Strategies
Our Hedged Strategies did very well last year, and we believe that if there is a surprise to the downside sometime in the next year, having these strategies in places will provide some risk mitigation. While they have struggled this year (which is normal in steep bull markets), we have kept the allocation to these strategies low, but we will expand them if we feel the risks are rising. Our Alternative managers have outperformed the bond market since rates peaked in August of last year, which was the intent. Should bond yields start to look attractive; we will move away from the Alt programs into more traditional bonds.

Fixed Income Strategy
The economic picture is very bright: the Fed is supplying abundant liquidity as the economy seems to be re-opening – post Covid. As such, yields moved higher into the first quarter. Total returns on bonds were largely negative at that point for the trailing 6 month period – anywhere from -15% on Long Term Treasuries to -3% on the broader bond market that includes all bonds (both Treasuries and Corporates) with a more moderate duration. Since then yields have dropped a bit for reasons outlined previously and total returns have largely been flat to slightly negative in bonds.

We have intentionally kept our duration short as we were concerned about higher interest rates and have mostly sidestepped the negative effect higher rates have had on bond portfolios. Our guess is that the bulk of the rate rise is behind us, but there is still a chance that they could drift higher in the coming months. Should we get the proper technical and fundamental signs that rates may have peaked, we will extend our duration, but right now we are maintaining a conservative posture in bonds.

Appendix A
“Bull markets are born on pessimism, grow on skepticism, mature on optimism and die on euphoria.”- John Templeton 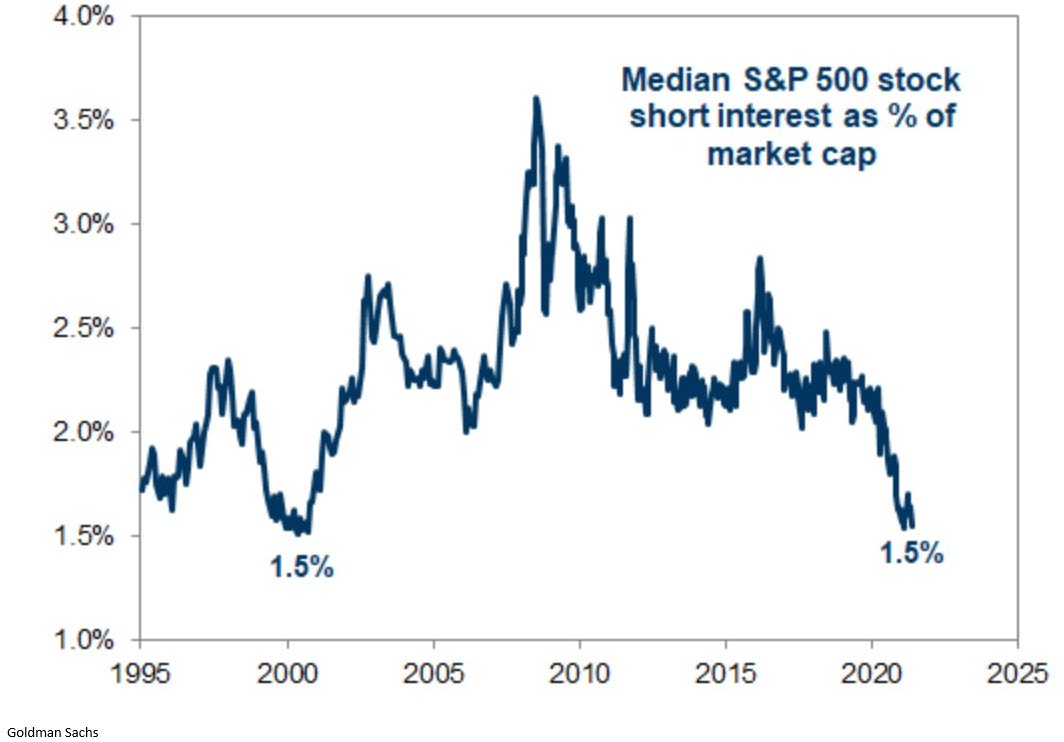 Interest in betting against stocks by establishing short positions has only been lower one other time in the last 30 years – at the top of the Dot Com Bull Market in 2000. 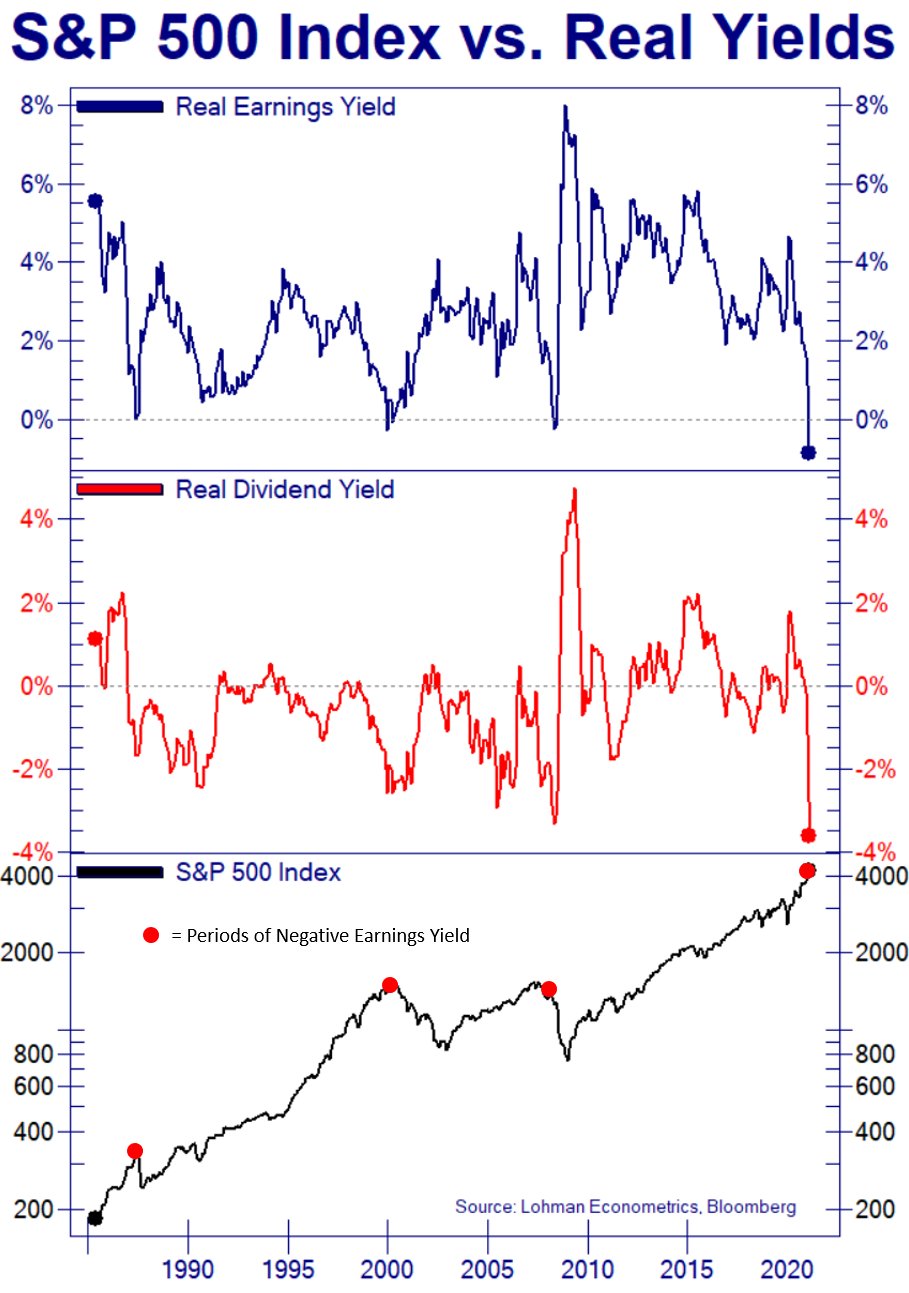 Earnings and Dividend Yields after inflation (Real Yields) are now at the lowest levels in history. If inflation is transitory, these yields may improve, but even if they do, it’s clear that valuations relative to interest rates and inflation are getting very full.