What Happened to the Quiet Market?

What Happened to the Quiet Market?

Overview
At the start of the third quarter the exceptionally low volatility we had experienced all year continued. By mid August we had set a historical record for low volatility going back to 1929. To this point in the year, the range between the highs and lows was as narrow as it had ever been! 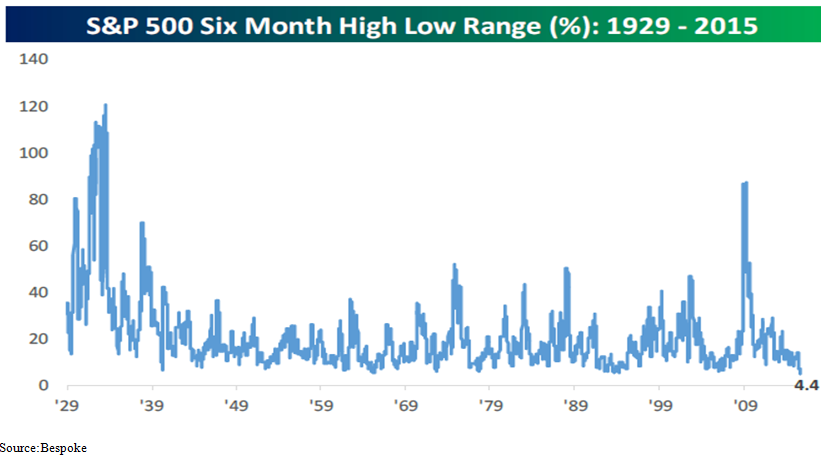 However, as you are probably aware, market volatility exploded at the end of August. On August 25th the daily range between the high and the low exceeded 3% as the market started its decent. The markets’ range expanded to 4% as it bottomed on the 26th. This kind of volatility has only happened 6 other times since 1962: the fall of 1974, the Crash of 1987, fall of 1998, Jul-Oct of 2002, fall of 2008, and Aug of 2011.
We can now say that 2015 will be a year of record low and high volatility. This is somewhat unsettling as the increased volatility we just experienced has only occurred after a 20%+ decline, which has historically developed over a number of months. In this recent pullback, we have only declined 12% from the highs of less than 3 months ago. The market has never seen this kind of increase in volatility with such a relatively mild decline so quickly from market highs.

Is there a fundamental rationalization for this volatility? The reason typically given is that this decline occurred when China depreciated their currency in an effort to stem apparent weakness in their stock market and economy. Global markets are concerned that China has a cold and we are going to catch it.

We are skeptical of this line of reasoning. U.S. GDP has about a 5% exposure through exports to China, so it’s hard to see how a weak Chinese economy will directly impact the U.S. It is true that many of the U.S’s larger trading partners have more significant GDP exposure to China, but the global impact still seems overstated to us. One could argue that the weakness in China is deflationary and should prove beneficial to US and developed world consumers and most businesses. Meanwhile, the U.S. economy is doing well, so we believe that a better explanation to the recent volatility is that the stock market has been rising for over three years without a 10% correction. We were overdue for some backing and filling in our market. It’s likely that we need to “digest” the gains we have had for the last three years since the 2011 correction and the secular bottom six years ago in 2009.

Our longer term outlook is positive and we expect a continuation of the bull market. However, there is a caveat: while a continued bull market is our base case expectation, the market can no longer be technically characterized as being in an uptrend. It remains to be seen if we will see a quick resolution and more upside, a longer choppy sideways period, or the start of a bear market. Part of our discipline is to always respect the long term trend and that trend is no longer up. This is not necessarily bearish, but it does mean that we should be slightly more conservative in our decisions. As such, we are holding higher cash levels. It is also likely that our Tactical Strategy will be a more important contributor to performance in this environment.

In the near term, sentiment is getting quite oversold so the bulk of the decline has likely already occurred. But declines with high volatility such as this are often followed by choppy range trading that often retests the lows of the initial move, so more volatility is still the likely outcome.

The Economy
Our outlook earlier this year for an improving economy remains on track. While global economies are sputtering, the U.S. continues to slowly improve. The CFNAI (a comprehensive measure of economic strength amongst a number of indicators) has improved over the last few months, now reading right at 0%, indicating that the economy is growing right at its historical trend. This is good enough for us to retain our positive outlook for the economy. We see very few measures on cracks in the armor here, but every month gives us more data so remain vigilant.

Fed Policy
The Fed has been a source of obsession for both investors and the financial media. When will the Fed tighten is the question overhanging the market. In our view this is misguided as the Fed opted to remain on the sidelines in the September meeting. We believe it likely that they will eventually tighten in the coming months; however, they will still leave monetary policy relatively accommodative. This is highlighted by our favorite measure of Fed Policy, the shape of the yield curve. As we have said for some time, until the Yield Curve gets to lower levels, it’s hard to say that the Fed isn’t on investor’s side. The chart below illustrates this. Historically, Federal Reserve policy rarely becomes a problem for the markets until the yield curve is much “flatter” down to levels significantly less than 1%. It is currently around 1 ½%, still quite accommodative, regardless of whether the Fed tightens this year or next.

Valuation
This month we would like to reiterate a point we have made numerous times. Measures of market valuation are imprecise at best and often conflicting. We want to emphasize that you cannot use measures of market valuation to indicate when to buy or sell the market. When market valuation measures get elevated, they often signal overvaluations years before the market tops. Moreover, there are many different measures of valuation and they often conflict. Currently most measures of valuation show a fairly valued to slightly overvalued market – the P/E ratio – depending on what method one favors – is between 15 and 18, about average historically. Some measures, like the Shiller P/E (basically an inflation adjusted, smoothed 10 year P/E ratio) and Tobins Q (a measurement of the markets valuation based on its replacement value) are signaling an overvalued market, but valuations based on earnings yield vs. interest rates (the “Fed Model”) show a still undervalued market.

Long Term Trend
While the three previous market measures (Economy, Fed, and Valuation) are solidly positive to neutral, we are unhappy to report that the long term trend of the market is no longer positive. Below you can see a chart of our long term model since 1980. If you look closely you can see that by this measure the long term trend has only turned negative eight other times since 1980. This model measure presaged the two bear markets that loom large for many investors – the popping of the Dot Com bubble from 2000 to 2003, and the Great Recession from 2008 – 2009. It also did a good job of signaling the bear market of 1981 – 1982 when the Fed was raising interest rates in an effort to fight inflation. But the other five times (1984, 1987-88, 1990-91, 1994, 2011), the market simply traded sideways in choppy fashion and eventually went higher. 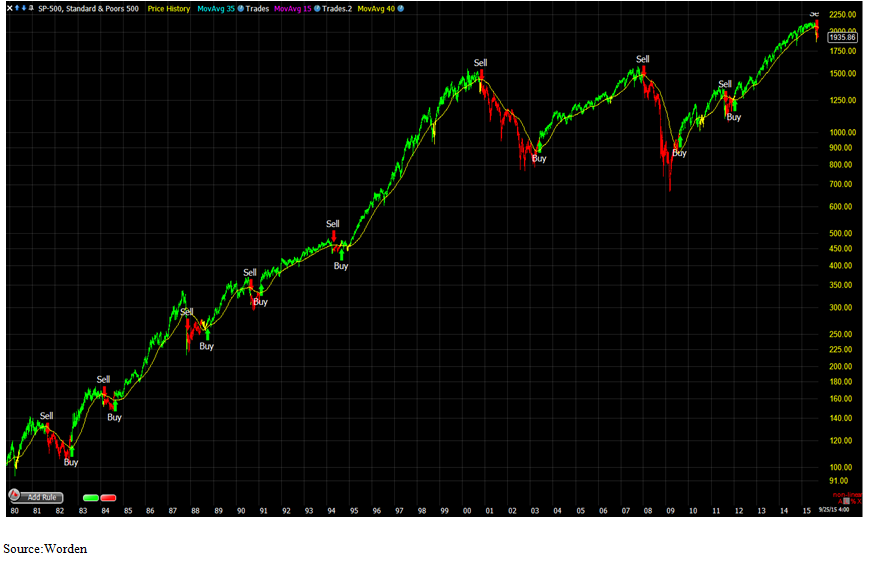 Our interpretation is to treat this as a warning- not an impending sign of doom. We do not want to be too quick to conclude we are in a new bear market simply because the long term trend is now negative. It’s just as likely that we may have a volatile choppy market for some time, and the market has some backing and filling to do over the next few months. Assuming the fundamentals stay positive and the Fed doesn’t get too restrictive, the bull market should resume. However, the road forward will likely be bumpier than we have experienced over the previous four years, and a higher level of caution is warranted.

Equity and Bond Strategy
Our Long Term Equity Model is comprised of stocks that we intend to own for long term capital gain treatment. Our holdings manifest strong measures of Value, Growth, and Quality and they continue to perform well, ahead of most market measures. We recently added several new companies and pruned the portfolio of a few stocks we were less positive on and believe we are well positioned in the current environment.

The Tactical Strategy has lagged a bit this year, especially when volatility was low, but the pickup in volatility and declines in the market have improved our relative returns. It’s quite likely that this Strategy will be a more important contributor to returns if market volatility continues to stay high. We have about 7 ½% cash due to the deterioration of the long term trend, so there is an overall element of caution here. The ETF portion of this strategy has done a good job of steering us away from International again this year as this has been a continued area of underperformance. We currently favor Domestic Large Cap Growth and Mid/Small Cap.

Our Fixed Income portfolios remain high in quality and short in duration. It seems as if every time it looks as if interest rates are poised to rise, which was certainly the case a month ago, something comes along to keep rates low. We still believe it is not the time to be aggressive in Fixed Income and our duration and credit exposure is conservative here.