Is the Economy Slowing?

Is the Economy Slowing?

1Q Wrap-Up
In our 2014 year end review, our view for 2015 was that it would probably be a decent year with average returns bit increased volatility, so far this seems to be as predicted. The S&P 500 was up + 1.0% YTD but the up and down volatility has been higher than normal. The Dow Jones Industrials are just over break-even at +0.3%. However Small/Mid Cap and International are doing better after last year’s poor performance, so we have some mean reversion occurring here. Bonds, depending on maturity returned ½% to 1 ½% as rates refuse to go up so total returns were respectable as well. All in all, it was a quiet quarter.

Economy and Fed Policy
The slowdown in economic activity during the first quarter gave pause for concern. A number of factors are responsible: weather, lower energy prices, a stronger dollar and West Coast port closures. Last Friday’s weak job report added to these concerns and confirmed the weakness seen earlier in the quarter. However, there are still reasons to believe that many of these issues are largely transitory, in particular the weather. Economic activity often slows in winter, and the economic data is seasonally adjusted to take seasonal variations into account. However, when the cold weather is extreme, the impact February is more significant especially in highly populated areas.

As a result of this economic weakness, companies have been cautious in their outlooks which resulted in analysts cutting already reduced earnings forecasts – analysts have lowered forecasts for over a quarter of the stocks in the S&P 1500. First quarter earnings will be closely scrutinized in the weeks ahead. While there is material risk that results are disappointing, there is also reason to believe that much of this concern is already “baked in the cake” and if the economy improves, or if results aren’t quite as bad as investors fear, the market could surprise to the upside.

Meanwhile, the Fed has done a masterful job of “threading the needle”, convincing investors that while they will likely raise rates this year, those increases will be measured. The Fed’s very public policy has likely cushioned the blow of a rate hike later this year. It is our belief that when the Fed does hike rates, it will be a positive for the markets as it signals economic improvement. However, along the way as policy normalizes, investors need to be aware that shocks from rate hikes do have the possibility of rippling through the currency, credit, and interest rate markets, which may likely affect the equity markets in ways that are a surprise in the short term. While the economy is fundamentally stronger and on a much stronger trend than at any point in the recovery, the financial markets do not always perfectly reflect the economy, and volatility may be higher than many expect.

No change to “The Four Pillars”
We frequently talk about Valuations, Monetary Policy, the Economy and the Trend of the market. We do not do this in an effort to forecast the future, but to simply confirm whether we are in a Primary Bull Market or not. The panels of charts on page 3 go into more detail, but nothing has changed here as valuations are not too pricey, the Federal Reserve is still on our side with accommodation, the economy is “good enough” (but the recent weakness bears watching) and the long term trend is still up. Make no mistake; if any one or more of these relationships take a turn for the worse, the market may likely already be in a correction. But it is still useful to constantly review these factors as we always want to know what kind of market we are in – bull vs. bear – as this determines how aggressive or defensive we are positioned in our underlying strategies and the mix of these strategies in our portfolios.

Equity and Bond Strategy
Our Long Term Equity Strategy generally performed well during the quarter, outpacing the S&P 500. Once reporting for 1Q earnings are behind us, we see opportunities to sell some companies that are either overvalued or underperforming and replace them with companies with better values and/or fundamentals. As always, our focus is on tax sensitivity in taxable accounts to keep after-tax returns as high as possible. Our biggest underweight in equities is the energy sector. While the bulk of the damage is likely done in this area, the fundamentals still look strained due to lower oil prices. We will slowly look to add additional exposure over the next few months. We are currently overweight in the following areas: Finance, Industrials, and Technology.

The Tactical Strategy is underperforming slightly at the end of Q1 as volatility is very choppy with no clear direction, but it should do better in a relative sense in the event of a larger pullback. Our long/short model has hedged a few times this quarter, but there has been little follow through to the downside so there has been little relative payoff. The Tactical ETF Strategy is overweight Small and Mid Cap and has also moved into the International space recently as the relative strength of these areas has improved.

Our Fixed Income portfolios are still high in quality and short in duration. Bond investors seem too complacent in our view. If the recent weakness in the economy turns out to be due to weakness in the oil producing states and an exceptionally cold winter, bond investors could finally be faced with a Federal Reserve that is raising interest rates due to a strengthening economy, which should prove to be a difficult environment for long term bonds, which we are avoiding. 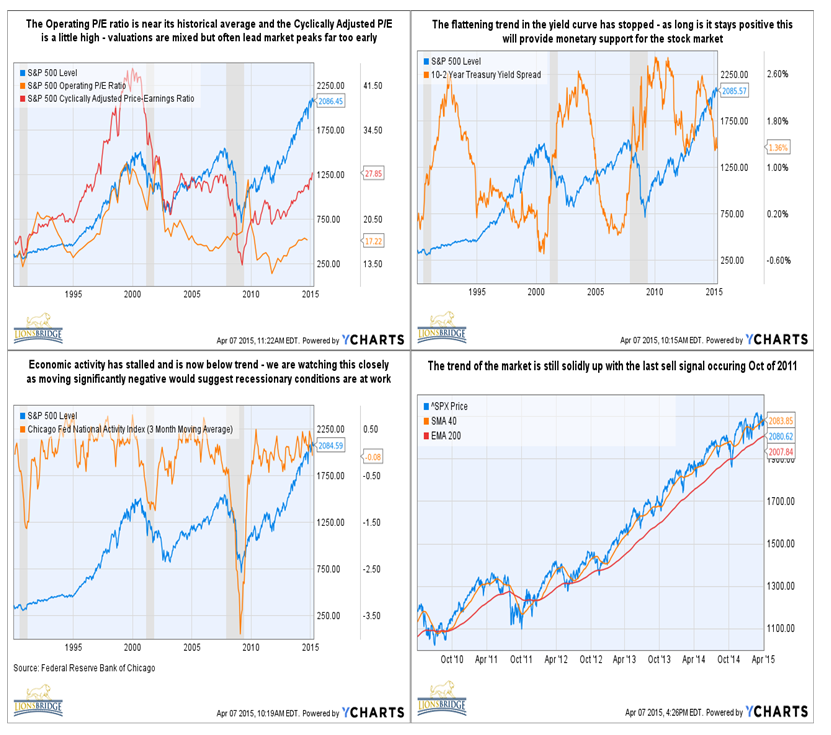