2014: An Average and Abnormal Year

Home/Market Research/2014: An Average and Abnormal Year
Next

2014: An Average and Abnormal Year

Looking Back on 2014 – an average year in some respects, decidedly not in others

“In general, we are looking for another good year, but perhaps more “average”. We believe that we are in the 6th or 7th inning of this bull market. The last stage is still in front of us, the stage that is accompanied by stronger economic growth and a Federal Reserve that starts to tighten. We are not quite there.”

However, in most other equity markets, it was far from average: Developed and Emerging International were decidedly negative at -6.0%, and Mid and Small Cap Domestic lagged larger capitalization stocks up only an average of 7.8%.

One of the biggest reasons for 4th Quarter volatility was oil prices. They have declined a whopping 45% since June due to higher production here in the U.S. (shale fields) and internationally as well (Saudi Arabia has refused to cut production), and generally weaker demand from international economies not improving as quickly as the U.S (Europe in particular). On the surface this seems to be a good thing, but lower oil prices also create concern that oil related companies and lenders to these companies (including high yield bonds) will not be able to adjust to the plummet quickly enough, resulting in layoff’s and borrower defaults. In the end, the obvious benefit to lower oil prices are likely greater than the detriments, but we will have to live with a bit more volatility as the markets sorts this out.

2015 should be another average year but with more volatility

The bull market is now almost six years old and has surprised most, largely because economic growth has remained resilient and profit margins are high, the Fed has been accommodative, and sentiment continues to doubt the bull market. We believe these forces will stay in place for 2015.

3rd Quarter GDP was revised up to 5.0%, and economic growth has been above 3.5% for 4 of the last 5 quarters, strength we haven’t seen since the 90’s. The simple truth is that the recovery is stronger than most have expected. Moreover, profit margins were thought to be “too high” and were sure to narrow, but the consensus has been consensus has been wrong here too. S&P 500 profit margins have stayed around 9% since the recovery and are now at a 22 year high at 10.1%. The reason is largely that wage gains have been muted and companies have not been spending like they typically do at this point in the cycle. When companies are no longer able to keep labor costs at bay and inflation rises from strong growth, the peak in margins may be at hand. But these are slow moving forces and as long as they stay in place the persistence of higher margins will remain.

The stronger economy has prompted the consensus to widely expect the Federal Reserve to raise interest rates. The drumbeat of a less accommodative Fed is likely one of the reasons for the pickup in volatility, and this will continue this year. Make no mistake, the Fed has played a large part in helping the economy and the markets improve from the Great Recession. Removing that accommodation is a large unknown. Moreover, U.S. Quantitative Easing (QE) has prompted borrowers worldwide to borrow in U.S. Dollars. The Dollar has been appreciating this year as expectations for higher short term rates have geared up, and this is making dollar based loans more expensive for foreign borrowers. The good news is the Fed is keenly aware of this, with one member a former director of the IMF, and dovish voting members maintain a wide majority in the Fed.

Market volatility in the 4th Quarter centered on not only declining oil prices but also fears of a stronger dollar and its impact on dollar borrowers and making the U.S. less competitive. However, historically a stronger dollar is usually bullish for the equity markets – there hasn’t been a single year since 1965 where the S&P 500 was negative when the dollar was up 10% the previous year (it was up 12% in 2014), and the median return was 14.8%. However, volatility does typically pick up, as the largest intra-year pullback ranged between -5.0% and -19.3% (Source: Bespoke Investment Group). While volatility may pick up, this the stronger dollar argues that a secular bear market is not at hand.

And while higher interest rates will likely mean higher volatility, the reason why the Fed is tightening is likely more important than if rates do end up rising. The reason behind this is that when the Fed starts to tighten, it usually is because they judge that the economy is strong enough to withstand policy normalization. This is positive! Now, if they judge that inflation is accelerating this would be very bad indeed, but we don’t see signs of this right now. There are just too many deflationary forces internationally.

Furthermore, stocks typically do well when the Fed raises rates. In the 14 periods since 1957 that the Fed raised rates, the market was negative in only 2 of these time periods, both in the 70’s, an era of high inflation – very different from now (Source: Wall Street Journal). And looking at the last 5 times the Fed raised rates, the one year period centered around the announcement was positive 4 of the 5 times (Source: Northern Trust). This does not guarantee the market will do well if the Fed does raise rates. But it does tell us that the myth that the market will certainly do poorly if the Fed raises rates, is just that – a myth.

Fundamentals, The Fed, Valuation, and Technicals are still positive

The four pillars of our outlook are graphically represented in Exhibits 1-4. Fundamentally, the economy is showing plenty of signs of strength (Exhibit 1), the yield curve is flattening but still positive indicating the Fed is still accommodative (Exhibit 2), valuation is in line with historical averages (Exhibit 3), and the long term trend is still up (Exhibit 4). As long as these four factors are positive we are constructive on the market. Make no mistake, these are leading indicators, they are confirming or coincident indicators, at best. But they provide an excellent measure to confirm if we are in a bear market or bull market (regardless of what our insights and forecasts lead us to believe!). Finally, while short term sentiment is a little frothy at the moment, which may be one reason for the current pullback, we continue to see few signs of excessive long term bullishness that are typically associated with secular peaks. The disbelievers in the bull market still outnumber the investors who are embracing it. This is a positive, in our view.

During the quarter we made some changes to our Long Term Stock Strategy, some of which we due to the decline in oil prices. We moved from an overweight to a significant underweight in energy names. One of the factors in our stock selection process is we sell stocks demonstrating poor long term relative strength, and this discipline got us out of energy stocks well before the carnage ensued. We also added several names to our portfolio that have an excellent blend of Quality, Value and Growth, and believe we are well positioned here, and are looking to add a few names if the market gives us the opportunity. Our Tactical model did a great job this year of steering us clear of the disaster in international stocks, and largely stayed with larger cap areas, which is where the best returns were. We also put on modest hedges twice during the quarter that ended up being uneventful as the market quickly turned higher. In bonds, we are keeping a high quality portfolio with a higher exposure to Treasuries than normal as this seems to be the area that is doing the best in that international buyers seem to find refuge from market turmoil here. Our duration continued to be short as our concern over rising interest rates is still in place. 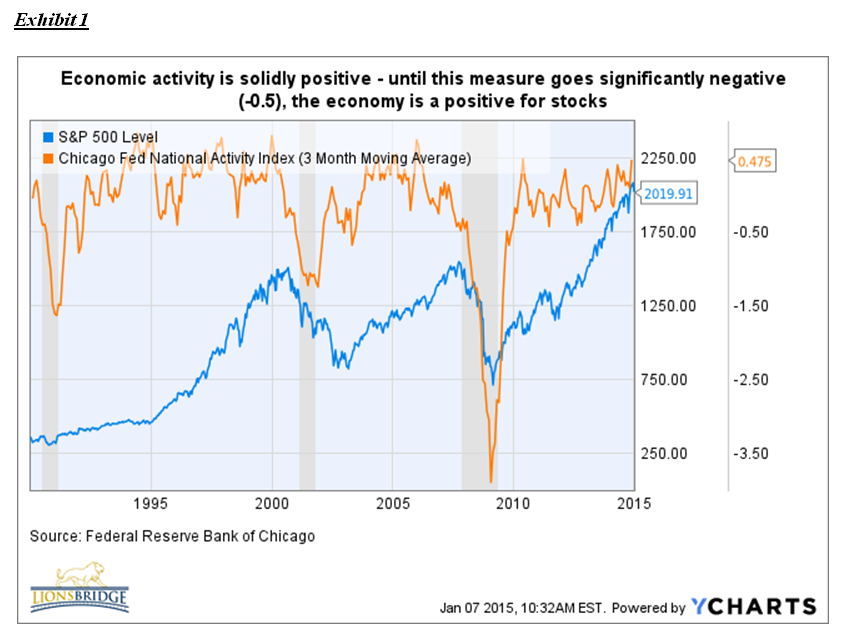 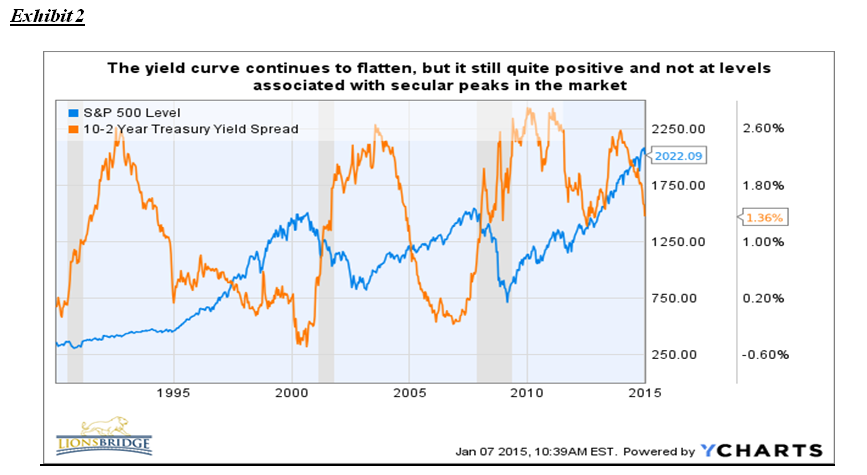 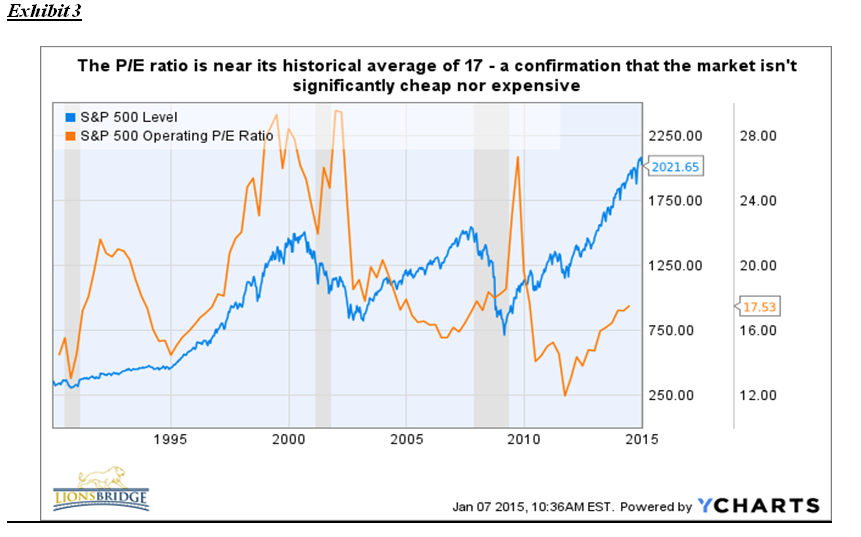 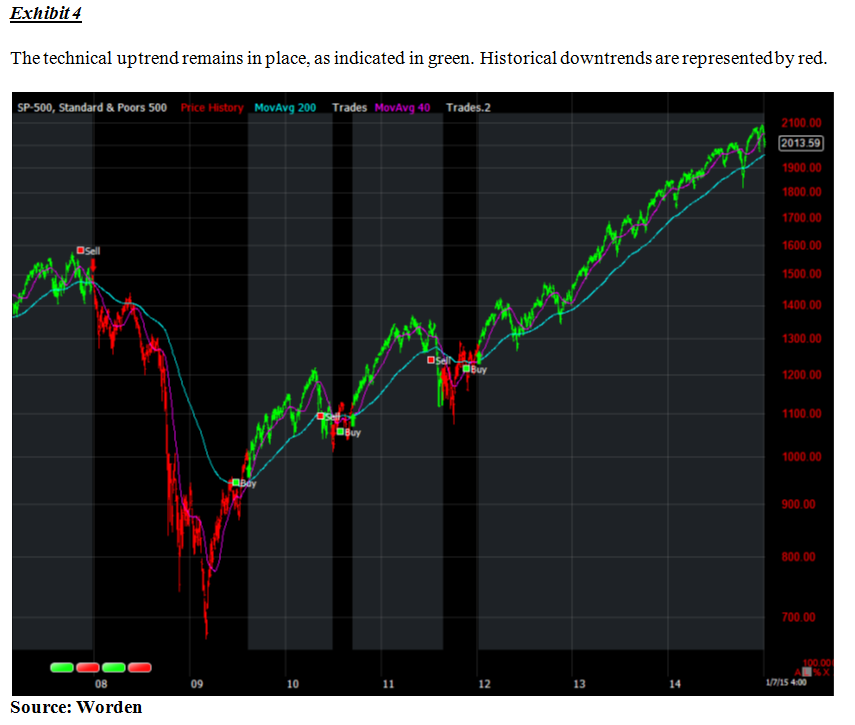